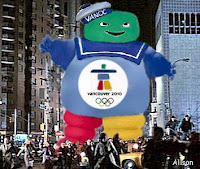 Organizers of the 2010 Five Ring Circus claim to have spurred the creation of 1,109 new units of social housing in Vancouver.

"But a Tyee review of the 1,109 units cited in the Olympic partners report finds shelter beds being counted as housing units, pre-existing units being claimed as new housing, and a double-counting of the 250 units of athlete housing at False Creek -- which will not necessarily become low-income housing after the Games."

The Tyee has also found that all but one of the remaining projects were approved and funded years before the Olympic bid was awarded in July of 2003.

You're really surprised by this news, I can tell.

Say, how much has VANOC set aside to give themselves raises again? Oh, yeah - $44 million.

David Eby from Pivot Legal Society points out that $44mil, along with the $64mil the city is expected to reap on the SE False Creek Project and the $250mil provincial housing budget, would be enough to build 3,200 units of new supportive housing. The 3,200 figure represents VANOC's own assessment of the number of new housing units required in order to ensure the Olympics would not contribute to rising homelessness.

The Olympics has been an insidious covert form of "urban renewal" for decades now. The Geneva-based Centre on Housing Rights and Evictions estimates that Olympic events in seven cities in the last 20 years has resulted in the displacement of over two million people.

Not entirely oblivious to the sullying of its reputation by corporate greed, the IOC has implemented an ethical review sytem to evaluate the housing situation in cities two years following the games. Having fucked up the opportunity to get the homeless off the streets by 2010 by providing them with shelter, VANOC and Sullivan and Campbell will presumably now need to resort to 'street cleansing', the further criminalization of the very people they have made homeless in the first place.

Posted by Alison at 4:09 am
Email ThisBlogThis!Share to TwitterShare to FacebookShare to Pinterest
Labels: Five Ring Circus