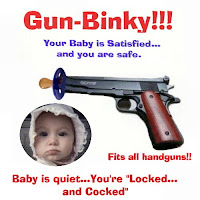 April Reign has a post up about the Con's hand-picked firearm advisory panel, which appears to be stocked entirely with gun enthusiasts. Here's a quote from one of them :

"If even 1 per cent of the students and staff at Virginia Tech had been allowed to exercise their right to self defence, then this tragedy would have been stopped in its very beginning and dozens of lives would have been saved," Dr. Mike Ackermann, a Nova Scotia physician, wrote in a letter to the Ottawa Sun in April. "There are never any mass killings at shooting ranges; only at schools and other so-called `gun-free zones."

The other panel members consist of two firearms dealers, a firearms expert, an RCMP commish, two cops, three guys from sports clubs, an Olympic pistol shooter, an SFU prof renowned for his opposition to gun laws, and a guy praised by the president of the NRA for being "one of the beacons of hope in a room full of enemies determined to eradicate your gun rights."

Interesting that Dr. Ackerman should advocate giving guns to students.

The Canadian Mental Health Association reports : "Suicide is the second leading cause of death among young people after motor vehicle accidents."

And wouldn't you know it, 60% of the time their instrument of choice is a handgun.

Note : The picture is from a spoof site advertizing Gun Toddler Products. As far as I'm concerned that picture would work just as well if you replaced the baby with an NRA member.

Posted by Alison at 10:38 pm
Email ThisBlogThis!Share to TwitterShare to FacebookShare to Pinterest

Your logic is faulty here.
Dr. Ackermann is right.
If 1% of students and staff had been armed at Virginia Tech, it's very likely many lives could have been saved.

No, your logic is faulty here.
Even if I allow that armed students and staff at Virginia Tech might have been able to bring down the shooter without it turning into a random bloodbath with even more casualties, a very iffy proposition at best, what's happening with those guns the other 364 days of the year, huh?

I don't personally buy the freedom angle on gun ownership but at least it's coherent.
To advocate gun ownership as a form of social engineering is completely bonkers.

"There are never any mass killings at shooting ranges; only at schools and other so-called `gun-free zones."

sweet jeebus on a bike. where to begin with this massed stupidity...how about ol' doc ackerman load up his wife and kids into the winnebago of love and head east, far east for a tour of kabul and kandehar. by his logic, he couldn't be safer, after all with all those guns around, nobody could possibly get shot, because other people have guns too. not like all of those perilously dangerous 'gun-free' zones.

Scary. I'm a gun owner myself, but one of those unusual ones who believes guns should be very very very hard to get. It blows my mind that anyone can talk about Virginia Tech in terms of "if the students had been armed". How about looking at why someone with a history of mental issues was able to get his hands on a gun in the first place?

Woohoo lets go back to the wild west where everyone was armed and no one ever got shot.