So how 'special' are we? 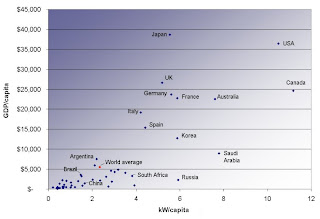 The red dot represents the world average, with China and India falling well below it in both energy consumption and income.
I would remind those who prefer whole country stats over the social justice issues exposed in per capita stats that the environment doesn't much care about country names and boundaries.
Just sayin', Steve.

Image courtesy of Frank van Mierlo
Posted by Alison at 2:46 am
Email ThisBlogThis!Share to TwitterShare to FacebookShare to Pinterest
Labels: Economy, Environment

A picture really is worth a thousand words!