All yr elekshnz is belong 2 us 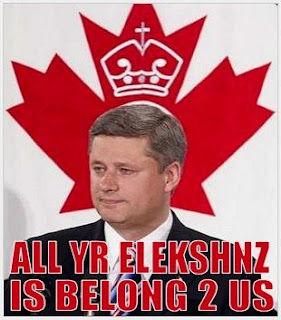 Not this time, buddy.

Major kudos to Blogging a Dead Horse for his post a week ago : "Conservatives begin replacing opposition MPs with the Pod People" The link to BC Con Caucus Chair and MP Dick Harris's little presser on appointing an unelected Con party hack to virtually replace the elected NDP MP Nathan Cullen kicked off a blogstorm that eventually woke up the paper(tiger)media.

Frank Frink has an excellent DKos diary post up, detailing the whole affair from BaDH, through the blogswarm to :

and CTV : Tories backtrack from candidate as representative

The 'candidate' in question intends to run as a Con in the next election, but is currently just a mayor.
Attempting to gain distance from Harris's maneuver, PMO spokesman Ryan Sparrow said, "He just kind of did that himself.''

I see. The BC Chair of the Conservative Caucus has gone all Lee Harvey Oswald on the party.
Unfortunately for Sparrow's little disclaimer, bloggers have already discovered other such examples of unelected fake Con MPs. What about those Pod People? I guess they are all acting on their own too.
Posted by Alison at 6:01 am
Email ThisBlogThis!Share to TwitterShare to FacebookShare to Pinterest
Labels: Accountability

And just where is that confounded grassy knoll anyway?

we now await the Dick Harris as LHO photoshop

Apologies to the Rev - didn't realize that he too had invoked LHO over at his place also.

Double sheesh from me, obviously...

Alison: "What about those Pod People? I guess they are all acting on their own too."

Absolutely. You know Steve doesn't involve himself at that level. Once he's checked that they've all cleaned behind their ears and flossed properly, he pretty much lets them go cage free.

Hez in ur riding...
Actin on hiz ownz

I see much duct tape in his future...