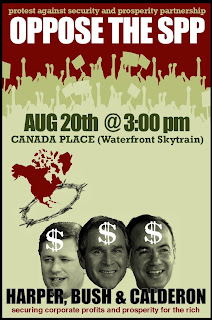 Decent coverage of today's protests from CBC on TV tonight, with good soundbyte explanations on SPP from Maude Barlow and the marchers interviewed. Very upbeat in tone.

A peculiar optic : the CBC reporters did the interviews while marching alongside the protesters - instead of their more usual stationary curbside shot - giving the visual appearance, intended or not, of solidarity with the protest.

The astute and witty Jennifer from Runesmith's Canadian Content - see link on sidebar - is live-blogging the protests from Ottawa, as conditions allow. She and her teenage son have driven up to attend her first protest since the Cruise Missile testing on Canadian soil in the 80's. As Jennifer says - plus ça change and all that.

Here's how her first day went.

Not to be completely outdone by the intrepid Jennifer, I intend to indulge both my fear of crowds and any event where a chorus of Kumbaya might break out at any moment by going to the march in Vancouver tomorrow.

A number of bloggers have been rather disparaging of attending the protests. I ask them to consider that given the Cons' news blackout on both SPP and Montebello, were it it not for the protests, there would be no news coverage at 11, no Mr Dion giving press conferences about it, and the majority of Canadians would never hear word one about either the SPP or the Montebello summit.

For info on local protests near you : Council of Canadians - Summit events

Posted by Alison at 11:58 pm
Email ThisBlogThis!Share to TwitterShare to FacebookShare to Pinterest
Labels: SPP

Looking forward to your report after the Vancouver rally.

I share both of your phobias but will be there at the Art Gallery, in the rain.