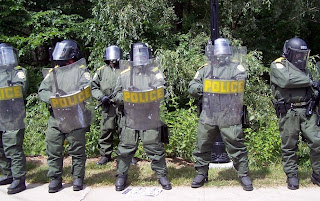 So seldom does one get to see riot police featured against a backdrop of beautiful verdant greenery. Or as Princess Leia put it : "A little short for a stormtrooper, aren't you?"

Photo by Jennifer at Runesmith's Canadian Content blog, back from the SPP protests at Montebello with her personal photos and stories and promises of more to come.

More pix and a good account of the Vancouver protests from Moonwolf at The News is Now Public.
I would only add to his account that the police were exceptionally well-behaved, staying well back from the protesters at all times ... except for those incidents where they were called upon to evict protesters from the lobbies of NACC businesses enroute.

In fact everyone was well behaved. So very Lotusland of us.
At one point during speeches outside the Art Gallery, I did see a very intense little huddle around two people on the ground under a chestnut tree so I went over to see what was going on. Just as I got there someone called out "Checkmate" and the little crowd dispersed.

Harsha from No One is Illegal announced that Harper had pronounced the protests "sad" and refused to allow the more than 10,000 anti-SPP petitions to be delivered at the Montebello gates. I mean it's not like he had to come out in his fuzzy slippers and personally accept input from Canadians or anything but you know Steve - always too busy being Steve.
Perhaps they should have told him it was a poll instead.
Posted by Alison at 12:11 am
Email ThisBlogThis!Share to TwitterShare to FacebookShare to Pinterest
Labels: SPP, Steve