Just Say No! to The Quagmire on Drugs 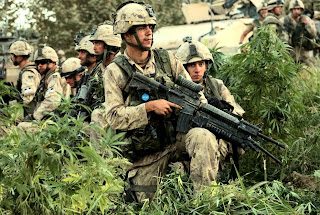 Ever since pot "Just Said No!" to me many years ago, I haven't kept up on The War on Drugs news much, other than to note that at best it appears to be a gigantic federal money laundering racket in those countries which have embraced it. I had rather assumed that along with giving women the vote and widespread acceptance of the benefits of bathing, legalization of marijuana was just one more benchmark in the long march toward civilization that we would eventually get around to.
While I'm not aware of Health Minister Tony Clements' position on female emancipation and personal hygiene, he recently announced an upcoming $64M federal anti-drug program, presumably to better align Canadian policy with the spectacularly corrupt and utterly ineffective US War on youth, blacks, hispanics and the poor Drugs program.

The UN recently reported that Canada has the highest use of marijuana in the industrialized world, clocking in at 16.8%, with over half of the population supporting decriminalization as laid out in the LeDain Commission 35 freakin years ago. The Toronto Star :

"In 2003, the Liberal government introduced a bill to decriminalize possession of less than 15 grams, making it subject to a fine but no criminal record.

The move caused immediate criticism in Washington. It warned Ottawa that if the bill passed, Canadians would pay for it at the border with increased security checks and lengthy delays.
In 2004, Conservative leader Stephen Harper said he opposed decriminalization but that "we can look at fines rather than jail terms for possession under five grams."

When the Tories came to power two years later, however, they killed the Liberal bill.
"Are they kowtowing to the U.S.? Almost certainly," says [Ottawa lawyer Eugene] Oscapella.

From an article on how the war on drugs is undermining western security, Misha Glenny writes in The Washington Post :

"British Columbia is now home to the greatest number of organized-crime syndicates anywhere in the world (if we accept the U.N. definition of a syndicate as more than two people involved in a planned crime). According to B.C. government statistics, the production, distribution and export of B.C. Bud, highly potent marijuana grown in hothouses along the province's border with the US, accounts for 6 percent of the region's gross domestic product. It now employs more Canadians than British Columbia's traditional industries of mining and logging combined.

The majority of the province's criminals remain passive hippie types for whom the drug is a lifestyle choice. But as Brian Brennan, the chief investigator for the drug squad of the RCMP told me, the marijuana trade is threatening to turn nasty as British Columbia's Hells Angels, one of the best-organized criminal syndicates in the world, moves in on the action.

An avalanche of B.C. Bud rolls southward into the United States every day, dodging U.S. customs in myriad imaginative ways. But as the Hell's Angels and other syndicates get stronger and their control over the port of Vancouver tightens, the ability of U.S. and Canadian authorities to monitor the border becomes ever weaker."

BC as a snow bound banana republic.
Reading US editorials like this, I can better appreciate why Americans respond to the news that you come from British Columbia with praise at how well you speak English.

Over in the Netherlands, where civilization seems to be on a more secure footing and possession isn't a criminal offence, consumption is only 6.1%.

Oscapala again in the Toronto Star : "This shows that criminal law does not prevent people from using marijuana, nor does legalization make people use it."

Posted by Alison at 4:15 am
Email ThisBlogThis!Share to TwitterShare to FacebookShare to Pinterest
Labels: War on drugs

That's one very weird little "Blame Canada" story in the Post. The tone is as if the BC border presents some new kind of huge danger to the US, but the article uses pretty out-dated info to do make the case.
It reads like a disinformation piece but I just can't quite put my finger on why.

By the way, if I send you my address...how much bud can you send my way?

Mike : That rather vague disquiet you feel is most certainly spin of some kind. Why would Brennan use such out-dated info?

Q : You post your request and address here and I'm sure someone will notice.