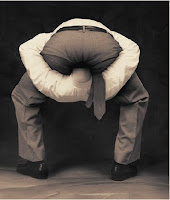 "The unfolding catastrophe in Iraq has condemned the political judgment of a president. But it has also condemned the judgment of many others, myself included, who as commentators supported the invasion."
In his NY Times mea culpa piece, Ignatieff explains there were the people who were right in their judgement against invading Iraq, there were people like himself who were wrong about it for the right reasons, and finally there were the people who were right for the wrong reasons - those being the ones who said it was all about oil and the US.
He invokes Isaiah Berlin, Roosevelt, Churchill, Bismarck, Truman, Samuel Beckett, De Gaulle, Machiavelli, Edmund Burke, Kant, and the prophet Isaiah.
These are the only dead mentioned in his apology.
.
UPDATE : Chet points out that Iggy is a deeply stupid man
Left End of the Dial : Michael Ignatieff in haiku. Heh.
Posted by Alison at 3:48 am
Email ThisBlogThis!Share to TwitterShare to FacebookShare to Pinterest
Labels: Ignatieff, Iraq

Oh no. He does not get to claim that it was the idealism of academia which kept him from seeing what a disaster Iraq would turn out to be, compared with the more pragmatic approach of politicians. Academia is where much of the opposition to invading Iraq came from, while the polis went along with the Bushcos.

Wow. Your last line hit me in the gut. Well said.

While I agree with Holly, upon further reflection I found myself wondering the following......

Can one be both deep and stupid?

Hi Ross and lovely to hear from you.
Just to clarify - I added the update line with the link to Chet after Holly had left her comment, so she was actually referring to the line about the dead.

Your recent pic of Iggy does exlain his tortured reasoning.

You were probably going to use lego but they're not that flexible or naive?

And great work these days by the way Alison.