And now for something completely predictable... 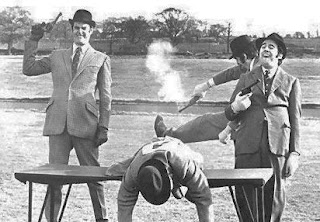 Recent testimony from economist Alan Greenspan, 19 years at the helm of the Fed, can only really be appreciated if you imagine that it is part of a previously undiscovered Monty Python skit :
"I made a mistake in presuming that the self-interests of organizations, specifically banks and others, were such as that they were best capable of protecting their own shareholders and their equity in the firms," Mr. Greenspan said.
Referring to his free-market ideology, Mr. Greenspan added: "I have found a flaw. I don’t know how significant or permanent it is. But I have been very distressed by that fact."
Rep. Henry Waxman pressed the former Fed chair to clarify his words.
"In other words, you found that your view of the world, your ideology, was not right, it was not working," Mr. Waxman said.
"Absolutely, precisely," Mr. Greenspan replied. "You know, that’s precisely the reason I was shocked, because I have been going for 40 years or more with very considerable evidence that it was working exceptionally well."
h/t Relentlessly : "Alan Greenspan testified today before the house that myopic self interest would not lead to the creation of the New Jerusalem here on earth."
Posted by Alison at 3:15 am
Email ThisBlogThis!Share to TwitterShare to FacebookShare to Pinterest
Labels: free-market ideology, Greenspan, money money money

I doubt if Alan's attempts at re-claiming his "legacy" will be successful.

The longer the financial fiasco lasts the more the finger-pointing crowd will have him in the cross-hairs. Deservedly so, I might add . . . .