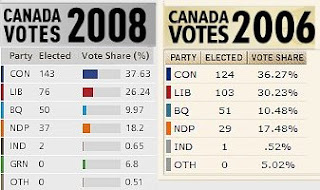 So what the hell was that good for?

No majority for Steve, mostly due to the Bloc in Quebec.
Voter turnout was 59%, the lowest in Canadian history.
In his acceptance speech, Harper said, "Voters have entrusted us with a mandate".
Given that Steve's win here is based on the support of 22% of eligible voters, at least that mandate isn't likely to be anyone that you know.

Libs boast the lowest popular support in a general election in the history of the Liberal Party of Canada. Tomorrow liberal media pundits will explain that this was caused by not enough of us voting for them.
No seat for Lizzie May but Dippers up by 8 seats.
Note that a voting coalition of Libs and Dippers can now no longer beat Steve, so I would like to propose a new coalition - one made up of the Libs and the Cons.
Then any candidate who doesn't support imperialistic war-mongering and corporate-run deep integration will leave to join some more progressive party that the 40% of the rest of Canada might actually feel like showing up to vote for.


TV coverage P.S. : Is it just me or is Michael Ignatieff beginning to resemble the American eagle in appearance?
Posted by Alison at 1:45 am
Email ThisBlogThis!Share to TwitterShare to FacebookShare to Pinterest
Labels: coalition, Election 2008, Elizabeth May, Stephen Harper

i think if you look at saam the eagle from the muppet show you have iggy's doppleganger.

Your proposal for a Lib-Con coalition will be adopted. Re-adopted, actually. It is second nature to those folks, and is, in fact, what we had prior to the call of this election.

We're in for a rough ride because Harper won a virtual majority last night and will govern accordingly.

Layton will feel great pressure to get with the Tory program in the name of national unity in the face of world economic depression. It will be up to us in the "real political economy" to remind him that his duty is to become the virtual leader of the opposition and mobilize that majority of Canadians who want to see real, progressive change.

I like the sound of your proposed Lib/con coalition.

It also wouldn't hurt my feelings if the NDP groomed a new leader. Last evening he managed to work into his speech - again - the "kitchen table verses the boardroom table" line. If he had also inserted the "Main Street verses Bay/Wall Street" my stomach would have turned. 'Ole Jack needs a new speech writer the next time around . . . .

hmmmm....that strategy may well work, alison. then maybe we can finally see the end of the old boy establishment...goodbye red and blue.

no surprise iggy is waiting in the wings. he's sort of like a dion/harper combo anyways and the libs may decided that good looks alone may do it. blech.

Right up until dinnertime, he had me hopin' and even thinkin' that the mirage coalition might make the nut.

However, I think we have to seriously worry about voter suppression if we go your way.....after all, I'm pretty darned sure that 59% was no accident.

So, I've done some focus group studies using our total awareness and surveillance system and consulted with our public relations demon and we have a few options for the new party name:

And my personal favourite:

C) Fucking You All For All You Are Worth (and that ain't much) Party. FUAFAYAWATAMP

D) Get Out Of The Way Of All Those Resources You Worthless Piece Of Shit Party. GOOTWOATRYWPOSP

Satan loves that one.

Re: the Suppression....Cliff has a very good post up.


(and I could never support a party that that darn heck Miroslav Satan loves....especially if I'm always laughin' when I tell people about it)

I agree with Marcus: the idea of electoral reform is screaming to be set free. Still, who would pursue it? Or, more specifically, which brave party with any possibility of power would pursue it (sit down, Jack Layton)? That might be a way for the Liberals to regain the centre and knock Harper out of the game. Cynical? Maybe. Necessary? Yes.

However, I think we have to seriously worry about voter suppression if we go your way

What suggestion was that, Gazetteer? The CRAL Party one? Or did I miss something here?