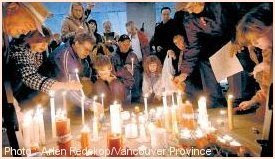 It's been over a year now already - get the fuck on with it.
Two freakin' postponements and the RCMP are still refusing to hand over documents to the Braidwood Inquiry :
"Documents show that with only one exception, all the statements were gathered within three days of Mr. Dziekanski's death."
"... the RCMP says it invoked exemptions under the Access to Information Act to protect the privacy of the person stunned and to guard confidences about the force's investigations and weapons."
Just get on with it.

PS : October 2006: "The case against a Prince George RCMP officer accused of having sex with underage prostitutes is thrown out by an internal disciplinary tribunal — comprised of three RCMP officers from out of province — because the force failed to bring allegations against the constable in a timely fashion.
Under the RCMP Act, a commanding officer must launch a disciplinary hearing within one year of becoming aware of an officer's alleged misconduct. "
Posted by Alison at 11:42 pm
Email ThisBlogThis!Share to TwitterShare to FacebookShare to Pinterest
Labels: RCMP, Robert Dziekanski

As I noted to you and RossK: Isn't it just a tad bit curious that one of the officers in the Dziekanski Tasing(TM) is also in the process of being charged with the death of the motorcyclist in Tswwassen? The curious part being: The latest RCMP investigation results are scheduled for January, which is the same month the officer in the Tswwassen death is due in court.

Well, I don't think anyone planned it this way, Bob - they are two separate crimes and will addressed by different processes. The media coverage will be damning though, each story beginning with Braidwood II, supposing it ever gets off the fucking ground, and ending with a bit about how the senior commanding officer at the Dziekanski airport murder was also DUI when he ran over the kid on the bike.
What is it you think we're missing here?