Steve and Kory - The tale of the tapes continues... 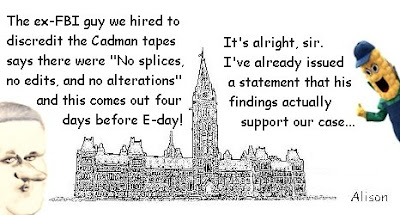 Why, just last week Harper successfully postponed a hearing into the veracity of the audiotape and now his own audio expert has blown it for him four days to E-Day.
And way to go, Kory! Would you say your new job as Steve's spokesthingey is more or less difficult than your previous internship with the ethanol lobby getting government grants to sell us on the idea to feeding corn to cars?
CBC :

"A tape recording at the centre of Prime Minister Stephen Harper's $3.5-million defamation suit against the Liberal party was not altered as the prime minister has claimed, a court-ordered analysis of the tape by Harper's own audio expert has found.
The key portion of the recorded interview of Harper by a B.C. journalist contains no splices, edits or alterations, a U.S. forensic audio expert has determined.

Kory Teneycke, a spokesman for Harper, maintained that the findings do not undermine the prime minister's case — and in fact can be used to buttress Harper's claims."

.
Good morning, Globe and Mail.
Creekside would like to congratulate you on your ringing editorial endorsement of Steve for another PM stint yesterday : "Harper is growing into the job".
It's not too late to take "refreshing candour and courage" off your list of reasons to vote for Steve. Just sayin'.
Posted by Alison at 11:19 am
Email ThisBlogThis!Share to TwitterShare to FacebookShare to Pinterest
Labels: Cadman, Globe and Mail, media, Steve and Kory

I'm rather disappointed with the G&M endorsement. It lacks...shall we say..."refreshing candour and courage".

What a wash job.

From the G&M article comments section: