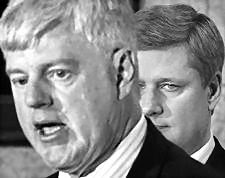 "As a Liberal, I believe the first step for my party is to replace Stéphane Dion as leader with someone whose first job is to rebuild the Liberal Party, rather than leading a coalition with the NDP.
His weakness probably fuelled the Conservative hubris that led to this fiasco in the first place.
But the first task should be to work collaboratively with all other parties to restore the confidence of Canadians in their Parliament."

~ John Manley in an editorial in today's G&M

I see. As a Liberal your advice is to ditch the coalition for a collaboration with the Cons, is it?

The only chance the coalition has to bring down Harper is before the next Speech to the Throne in January. Best you work on playing nice instead, says deep integrationist John Manley, as a Liberal. Feh.

OK, you all know the words by now - everyone sing along :

John Manley : Harper's hand-picked chair of last year's Afghanistan panel which sought to legitimize Canadian partipation in Operation Enduring Freedom, Canada Chair of the deep integration project, 2005 Independent Task Force on the Future of North America, and author of "Building A North American Community" for the US Council on Foreign Relations with Thomas d'Aquino of the Canadian Council of Chief Executives and Robert A. Pastor the self-proclaimed father of the North American Union :

Next stop for Manley - IggyNation.

Where are the "opinion leaders" to call Manley on this one? Why does he get a platform and not a coalition supporter?

The private media propaganda war is in full swing.

I've been wondering what this Manley guy's story is, and this pretty much explains it. Plus Marcus' analogy to joe LIEberman makes it crystal clear.

Terrific post, Alison -- and that is one scary photo. May I steal it?

Speaking of deep integration, a labour mobility deal has been signed in Ottawa.