Canada Colombia FTA : How much for the little girl Part 2 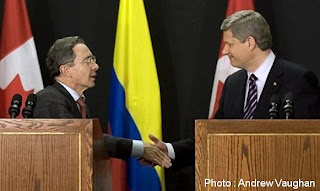 The second item on the agenda when parliament resumes on Monday is the second reading of the Canada Colombia Free Trade Agreement, Bill C-23.
The Dominion posts that :

"There are strong indications that the Liberal Party are intending to support the bill. We managed to back them off once before - we need to do so again."

and provides email addies of the relevant Lib MPs, including former human rights activist Michael Ignatieff. Go.
This can only pass with Liberal support, the Bloc and NDP are opposed.
.
Yesterday the US State Department ok'd $32 million that Washington had previously withheld due to human and labour rights abuses, bringing to $545 million the total going to Colombia this fiscal year to fight gangs and drug smugglers buy access to Colombian military facilities.

"A U.N. human rights investigator reported separately in June that soldiers had killed hundreds of innocent civilians, falsely identifying them as guerrillas slain in combat to boost body counts. Officials have vowed to eliminate that practice."

Oh well then.
Of course these 'practices' have been ok with Harper since way back in 2007 :

"When we see a country like Colombia that has decided to address its social, political and economic problems in an integrated way, that wants to embrace democracy and human rights, then we say, 'We're in,' he said."

"We are not going to say fix all your social, political and human rights problems and only then will we engage in trade relations with you. That's a ridiculous position," Harper said.

and at last year's Leaders' Summit :

"if the United States and our allies turn their back on an important ally in this region, that will have long-term security consequences for all of our countries in North America."

Not to mention putting a serious crimp in the planned relaunch of the Free Trade Area of the Americas Plan B, aka "Pathways to Prosperity in the Americas".
.
Two days till C-23 hits parliament. Send a freakin letter to the Libs now. GO.
.
And I suppose you could also drop a note to Steve :
How much for the little girl?
.
Update : Pogge's letter :
.
To: IgnatM@parl.gc.ca, RaeB@parl.gc.ca, MinnaM@parl.gc.ca, CanniJ@parl.gc.ca, BrisoS@parl.gc.ca, SilvaM@parl.gc.ca
.
Dear Honorable Members:
The Conservative government has placed Bill C-23, the legislation to implement the Canada-Colombia Free Trade Agreement, on the order paper for this Monday the 14th of September. As I'm sure you are all aware, the Parliamentary Committee on International Trade has recommended that this legislation not be implemented until an objective third party does a thorough assessment on the human rights record of the Alvaro Uribe government which, by many accounts, has the worst human rights record in the western hemisphere.
I would ask that you please honour the recommendation of the committee and vote no on Bill C-23.
Yours truly,
[... ]
.
I'm betting Pogge wouldn't mind if you sampled it.
.
Posted by Alison at 11:33 am
Email ThisBlogThis!Share to TwitterShare to FacebookShare to Pinterest
Labels: Bill C-23, Canada-Colombia Free Trade Agreement, Colombia, human rights, Ignatieff, Pathways to Prosperity in the Americas

I'd even waive my normal royalty. ;-)