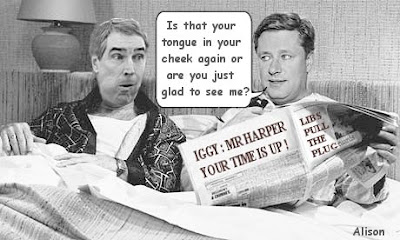 .
Well who the hell knows? Happy Groundhog Day.
The Star :

"The Liberals will no longer help prop up Prime Minister Stephen Harper's government, paving the way for a fall election if the other opposition parties also vote no confidence in the Conservatives.
"Mr. Harper, your time is up," Liberal leader Michael Ignatieff said in a speech to troops today. "The Liberal party cannot support this government any further."

was the CBC in there?

war in Afghanistan - Iggy ensured it was extended. And he would have got Canada into Iraq. I don't think Iggy would have any traction, in fact, it would be detrimental. Sure Iggy, pick Afghanistan.

Jan : Yup, Iggy gets to wear that one and a couple of others after we get rid of the fucking Cons.
So, Jan, are you willing to support Harper wrecking the infrastructure of the country just because we don't think the Libs are a sufficient improvement?

I think he would say---I don’t know what to tell you buddy, but stick with it….