No HST protest in Vancouver 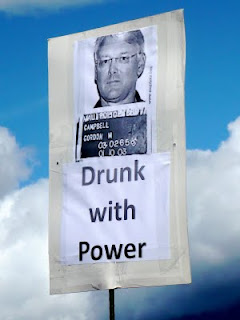 Thousands turned out in Vancouver today in an anti-HST protest that united politicians from across the local political spectrum.

West End Bob was there and brings us details and photos.
Former Socred premier Bill Vander Zalm - yes, The Zalm :
"The HST is a cruel tax - it takes from the people, the consumers... and it's giving to the big corporations. They're the real beneficiaries."
TD Economics reported yesterday that businesses will win big under the HST, aka Harper's Sales Tax, slicing $6.9 billion off their costs in Ontario and B.C. combined. Steve is even giving Gordo $1.6-billion to help implement it.
BC LINO Finance Minister Colin Hansen promises there will be a "trickle down effect" but people really don't seem to fancy being pissed on any further :

Ipsos Reid poll : B.C. Liberal support has collapsed and the party now trails the NDP by 10 percentage points. Only 35 % of voters polled said they'd support the government if an election were held today.

Environics poll, via The Hook at The Tyee : 42% of voters in Vancouver Point Grey - Gordo's own riding - would sign a petition to recall Campbell, including a quarter of those who voted for him in May :

An overwhelming number (79 percent) believed the Premier should have told British Columbians that his government was going to introduce the tax prior to the election.

When told that the tax collected from consumers through the HST would all go to corporations instead of being used to pay for better government programs, 64 percent (including 59 percent of BC Liberal voters) said they were now even more
opposed to the HST.

On the critical issue of whether or not British Columbians would support modest tax increases in order to pay for needed government services -- the poll found a large majority (78 percent) would support an increase.

... This finding crossed all political lines, with 74 percent of Liberals also coming out in support of the proposition that taxes should be increased to support public services.

Recall Gordo. Do it.
.
Update : Dave at The Beav reports that the Victoria paper The Times-Colonist is looking for evidence that Gordo, despite pre-election promises not to, already had plans to implement the HST before the May election.
Here ya go, Times Colonist : a smoking gun pointed right at our heads from Gordo's policy think tank, the BC Progress Board, dated December 2008 : Investment British Columbia: Current realities and the way forward.
Response From the Progress Board :

"The most profound area for improvement to productivity, but also the most difficult to achieve, is in replacing the Provincial Sales Tax with a value-added tax, preferably harmonized with the Goods and Services Tax administered by the federal government. Such a change would significantly lower the marginal effective tax rate on investment and reduce distortions across sectors. Harmonization would face considerable challenges, not the least of which is public opposition as a result of a shift of the burden from business to consumers.

"In the short and medium term, lower-income British Columbians could see declines in real income as consumer prices rise. Public opposition to such a shift would be a substantial concern to policy-makers."

They also go on to advocate for TILMA, Gateway Pacific, run-of-river projects, and continued "harmonizing regulation between the province and the US". Additionally, they target the federal Fisheries Act as posing "overwhelming challenges to development in BC"
.
Charming.
.
Posted by Alison at 7:22 pm
Email ThisBlogThis!Share to TwitterShare to FacebookShare to Pinterest
Labels: anti-HST protest, BC Progress Board, Harper's Sales Tax, LINOs

Glad to see you're assisting The Times-Colonist with their investigative work, Lady Alison.

Perhaps you should request renumeration for the work done ? ? ? ?

Well, you know I was just using that as an excuse to point out the fabulous advice Gordo is getting - and apparently following.
The TC is doing a FOI for emails.
Integrity of Gordo's email stache - not exactly a sure thing.
Loved you pix.

"In the short and medium term, lower-income British Columbians could see declines in real income as consumer prices rise"

Well DUH ... Mulroney knew that when he replaced the 'manufacturer's tax' with a sales tax. Shifting the tax burden from corporations down to individuals.

(and for that matter Chretien and Martin knew that when they promised to get rid of this pestilential and then reneged.)