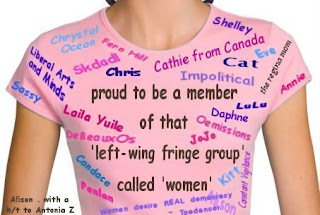 Antonia Z writes :
"I'm thinking of making T-shirts: "Proud to be a member of that `left-wing fringe group' called `Women.' "
.
I woulda put it on a thong for ya too, Zerb, but the letters got all bunched.
She is talking about Steve's unplugged nonsense from Wednesday :
"Instead of subsidizing court challenges, the previous government was doing, subsidizing lawyers to bring forth court challenges by left-wing fringe groups .."
Zerb continues : "Thank you for finally admitting that your government shut down the Court Challenges program in 2006 not just because, as then-Heritage Minister Bev Oda claimed in Parliament, you "recognize the importance of women" but because you believe that that women's rights are "left-wing fringe" rights."
As well as gays, lesbians, persons with a disability ...
The Court Challenges Program (CCP) funded "test-cases initiated by individuals and groups to challenge federal laws and policies that violate their constitutional equality rights."
Yeah, good thing we got rid of that. Since 2006 only the rich can afford to worry about equality.
Anyhow leave me your name to sign onto the virtual t and I'll repost it with more names tomorrow.
And pass it on - I do believe there may still be a couple of women left in Canada in danger of voting for the Conservative Reform Alliance Party coalition.
Update : Antonia Z has a facebook page for Proud to be's and her own t-shirt design.
Check out her blog tomorrow (Sunday) for more.
.
Sunday night : Final virtual t posted. Thanks to all for your names, your links, your support in getting the word out about Steve's vile petty mean-spirited divisive and undemocratic remarks. Hurray for us. I've thanked you properly at The Beav.
.
Monday night : Ok, guys, here's your chance. DAMMIT JANET - Go.
.
10 days later : Thanks to Antonia Z's T-shirt inspiration ten days ago, actual real not virtual Proud to be t-shirts now available as a fundraiser for LEAF.
.
Posted by Alison at 3:46 pm
Email ThisBlogThis!Share to TwitterShare to FacebookShare to Pinterest
Labels: constitutional rights, Court Challenges Program, Feminism, Harper unplugged, Zerbisias

Is the teeshirt available in other colours ? ? ? ?

Er, are there any freebies? Cuz if so, count me - and friend Daphne - in. WE WANT T-SHIRTS and consider ourselves proud members of that "left-wing fringe group" called 'Women'.

I started a Facebook group, now with 400+ members. I have talked to LEAF about picking this up as a fundraiser. I will blog this all tomorrow and more.

Put my name on your digital shirt, Alison! I posted your blog on this on my Facebook profile. We just need someone who can MAKE the darn tshirts!

I would love one of these tshirts - or two or more....

When will they be available?

Kitt : It's only a digital t but you could print this out when it's done and get it printed up yourself. There is another design at Antonia's facebook page above and I believe these ones will be available for ordering. Check Antonia's blog on Sunday.

Warmed up leftovers warmed up can taste better than than the actual meal.
Sign me up.

Sign me up. Great idea. I would buy at least one.

love the shirt. love it.

This should also be posted at The Galloping Beaver!

We'll be the ones shamelessly "showing the pink" and flaunting our membership in the 'left-wing fringe group' called women.

I very much like that this T has real people's names on it.
Thank you for this.

count me in too!