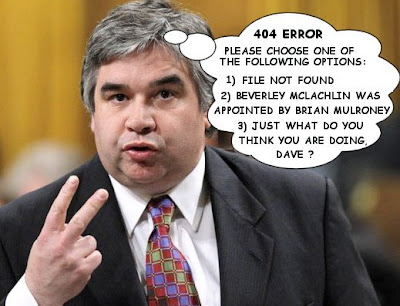 Oh noes - activist judges on the bench, some of them appointed by Cons!
Public Safety Minister Peter Van Loan says he fears for the government's ability to fight terrorism because of "an increasingly complex legal environment" in which judges are no longer deferring to the government in its efforts to deport foreign suspects.

"It raises questions about whether we can protect national security and I can tell you I am concerned," Van Loan told Canwest News Service. "I spend a fair bit of time thinking about it."

"It" presumably being the Supreme Court's efforts to balance our rights and freedoms against your crap cases based on hearsay and intel derived from torture.
Think again, Bucko.
.
Meanwhile - oh noes for Cons again - Russkies!
A Lutheran church in Vancouver has been providing sanctuary since June to a former Russian KGB translator who is now facing immanent deportation to Russia for ... wait for it ... admitting to being a former KGB translator on his application for permanent residence in March 1999.
The federal court has found the government does have the right to deport Mikhail Lennikov back to Russia but, as CBC points out, is not required to do so :

The issue, then, is why Public Safety Minister Peter Van Loan thinks Lennikov is "detrimental to the national interest."

The public safety minister adopted as his reasons a ministerial briefing note by Stephen Rigby, appointed to be the head of the Canada Border Services Agency in 2008.
CBC debunks the CBSA's "factual errors" intended to discredit Lennikov here.
.
Posted by Alison at 1:35 pm
Email ThisBlogThis!Share to TwitterShare to FacebookShare to Pinterest
Labels: activist judges, CBSA, Van Loan

"I spend a fair bit of time thinking about it."

That'll happen when both of those neurons are expected to fire repeatedly in any sort of orderly fashion.

Canada has become an unending nightmare for anybody thinking beyond cliches, slogans and talking points. AAAAARGH!

Lindsay beat me to it.

Heartless. What a despicable man this Van Loan is.

Totally spot on, Lindsay! Just take a look at the face in the photo! Would you leave this man alone without qualified care assistants available?!
It is very clear that the man does not understand the division of Government from Law, & is simply parroting what he has been told to say - which is far more frightening I think!