Another First for Canada! 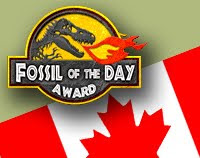 First Place: Canada
"The day’s fossil award goes to Canada for blocking agreement on using 1990 as the base year. Canada is now the only country more focused on finding creative ways to hide their emission increases and make their weak targets look ambitious than solving the climate crisis. Unfortunately, those emissions linger in the atmosphere much longer than Canada’s embarrassment about them."
~ From the Climate Action Network - "a coalition of over 450 NGOs worldwide dedicated to limiting climate change to sustainable levels"- yesterday in Bangkok.
.
Harper's 'plan' is to reduce emissions 20% by 2020 using intensity-based targets. Translated, this amounts to a mere 3% reduction below our 1990 levels by 2020. Big whoop say the other countries at the conference.
.
Meanwhile back here at home, Bill C311 - the Climate Change Accountability Act establishing 1990 as the base year, is holed up at the Environment Committee (6 Cons, 3 Libs, 2 Bloc, 1 NDP) :

First introduced by Jack Layton in 2007, it actually passed in 2008 but then was shelved before it could receive the necessary blessing from the GG when Harper called the 2008 election .
.
When reintroduced this session, it narrowly passed 2nd reading on March 31 with 141 Yeas to 128 Nays. All six Con members of the Environment Committee voted against it.
.
Amusingly, in the debate in the House, Con Environmental Parliamentary Secretary and Environment Committee member Mark Warawa argued the bill was "probably unconstitutional" and they would prefer to have "a suite of eco-actions" instead. He also boasted that the Cons will give $1.5 billion in taxpayers money over five years to subsidize experiments by the fossil fuel industry in carbon capture and storage.
.
Two months till the UN Climate Change Conference in Copenhagen and the Cons are still banking on The Jetsons to save us.
.
Send the bastards a letter.
.
Just this one time I'll let you use the big crayons.
.
Posted by Alison at 3:12 pm
Email ThisBlogThis!Share to TwitterShare to FacebookShare to Pinterest
Labels: Bill C-311, Environment, Environment Committee, GHG emissions, Kyoto

i believe the cons percieve nature as a clump of dying dandelions.

k-k-Canada is first among the fossils, but this is not the first time, Rona Ambrose had that honour at the last round ... dinosaurs ... Alberta ... it all fits eh?