Olympics - Going for the gold in bullying 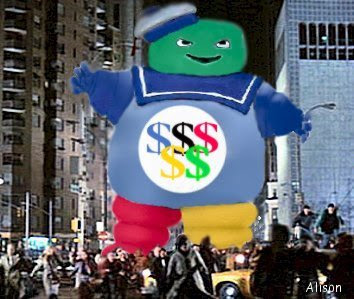 An enthusiastic supporter of the Beijing Olympics who posted his photos online at Flickr under a creative commons licence - which allows anyone to use them for free with attribution - received a cease and desist letter from International Olympic Committee lawyers :

"Images of the Games taken by you may not be used for any purposes other than private, which does not include licensing of the pictures to third parties ...

Even the "O" word can't be used now without prior written IOC consent?
I knew words like "winter" and "gold" and "Vancouver" were off-limits -- but, somewhat inconsistantly, not words like : boondoggle, evictions, SROs, homelessness, or cost over-runs.
Very well, have it your way. "Owelympics" it is then from now on.
Out here in BC at Owelympics Central, we've moved up from criminalizing 2010 Five Ring Circus protest in public places and stalking nursing students on campus who happen to know somebody who doesn't support the Owelympics.
Now the BC government wants to remove signs and graffiti from inside your home even without your consent: (h/t Waterbaby by email for Bill 13):
Bill 13 Part 9 - Enforcement of bylaws in relation to signs

(2) Except in the case of a significant risk to the health or safety of persons or property, a person
(a) may only exercise the authority in subsection (1) at reasonable times and in a reasonable manner, and
(b) must take reasonable steps to advise the owner or occupier before entering the property.

(3) A person may only exercise the authority in subsection (1) to enter into a place that is occupied as a private dwelling if any of the following applies:
(a) the occupier consents;
(b) the specified municipality has given the occupier at least 24 hours' written notice of the entry and the reasons for it;
(c) the entry is made under the authority of a warrant under this or another Act;
(d) the person exercising the authority has reasonable grounds for believing that failure to enter may result in a significant risk to the health or safety of the occupier or other persons.

(4) A person who has entered on property, or entered into property, in accordance with this section has the authority to enforce the specified municipality's bylaws in relation to signs by removing, covering or altering the sign that is in contravention of these bylaws.

Ditto for "graffiti", covered in section 33.

CBC : "City officials have said the law is intended to clamp down on so-called ambush marketing, and it includes an exception for celebratory signs, which are defined as those that celebrate the 2010 Winter Games and create or add to the festive atmosphere."
For the rest of us "uncelebratory" types, there's the prospect of a $10,000-a-day fine and six months in jail if we don't keep our little heads down from Feb 1 to March 31.
.
And if, as spun by city officials, they were only worried about "businesses trying to exploit the games logo", why also make a separate provision for busting graffiti?
Answering questions about Olympic security back in June, city manager Penny Ballem told the Vancouver council. "The city has no accountability in terms of the role and policies of the 2010 Integrated Security Unit. We are only able to ask questions."
A week ago I heard BC Minister of Public Safety and Solicitor General Kash Heed give the same excuse on CBC radio about the stalking of the nursing student : "There's nothing we can do. It's a global thing," he said.
Fun fact : Two of the RCMP who presided over the tasering and killing of Robert Dziekanski at Vancouver airport two years ago - Monty Robinson and Bill Bentley - have been reassigned to Owelympic detail.
.
Monday night update : # of comments under CBC story above : 881 !
That's 881 comments under a story now three days old and still going strong.
Commenter "Defeated" at 10:36 tonight :
"The problem with the people of B.C. is that we rarely do much other than bitch,and even that is usually after the fact!
Unfortunately, those we choose to elect after they have offered up a bunch of feel-good freebee's, understand that all too well.
In essence, they buy our votes and loyalty with handouts right before an election.
Works everytime, and our politicians know that too.
We know the promises are rarely kept, but still, we fall for it every time, even with a government we KNOW is rotten to the core.
The evil we know is always easier than the evil we don't know, if you are afraid of having your safe little world rocked.
What is taking place in B.C. with social cuts,the HST,and the Olympic embarrassment,etc.etc.could have been stopped, or at least altered to where it would at least be tolerable.
Our politicians are controllable and we do have the power to make them listen and act accordingly.
Now, when they take away our right to free speech, still we do nothing.
They knew we wouldn't do anything, except bitch.
We see the examples of waste, and indeed,the scamming of our tax dollars by government contractors, civil servants, and probably by a few politicians as well.
We see the apparent government control over the media and even over our justice system, according what suits the needs of those we elect.
We sit back in our safe little worlds and watch them bury their own dirt,right under our noses. Still we do nothing.
Where are the protests?
Where is the general strike that would end the HST tax grab and hopefully this government.
Where is the mass protests on the lawns of the legislature in Victoria, that would go a long way to making this government begin listen...or at the very least,turf out the guy behind this crap...Gordon Campbell!
Sheep."
.
Posted by Alison at 8:11 pm
Email ThisBlogThis!Share to TwitterShare to FacebookShare to Pinterest
Labels: 2010 Games, BC gov, Bill Bentley, Five Ring Circus, graffiti, Integrated Security Unit, Kash Heed, Monty Robinson, RCMP, sucking up to the IOC

Look out, Lady Alison. You keep this up, you'll be on the same list Chris Shaw is.

Clearly o-rings are what brought the Challenger down or all blowd-up as the up or down in that instance is a no-matter and those items can be substituted for the Oilympdick symbols as it is for slander, verbal abuse can fill for it. Throwing **i* at the fan to spread as much of it as can be done is the art, plicable, and as long as malfeasance is the goal then all for it - toss away.

Bob : "Owelympics" not mine - been around for a while and can't remember who coined it originally.

Here's another fun fact for ya:

4,500 Canadian military troops will be deployed to the 2010 Vancouver Owelympics — that's twice the number Canada has in Afghanistan.

Zee : Meanwhile the US Olympic Committee is challenging the trademark of the Washington paper The Olympian, even though it's been The Olympian longer than the Olympics in its present incarnation has been the Olympics.
Insert giant squid metaphor here.

Great, so when I throw my NOlympic Garden Parties, I have to worry about taser happy mounties roaming my neighbourhood.