Yes, CBC, how about that blood?

CBC challenges the protesters from the Bill C-311 demonstration in the House two days ago to explain "the discrepancy" between their crappy video clip in which the blood on Jeh Custer's face from his bout with House security is not visible, but then suddenly is visible an hour later when he is interviewed on CBC. Is this incompetent slagging of protesters part of your new look, CBC?

Anyway, here ya go above, CBC, and again here. How about you explain that.

"Mr. Speaker, I rise today on a question of privilege in regards to the disturbance in the public gallery yesterday during question period and charge the member for Toronto—Danforth [that would be Jack Layton] with contempt for his involvement in this incident.

It has now become quite clear that the people who disrupted the proceedings of this House were guests of the leader of the NDP. That member booked room 237-C from 11:30 to 1:30 p.m. yesterday afternoon prior to Question Period for the use of that group. It was set up, according to the parliamentary functions room request form, for theatre-style seating, standing microphones for questions, and media feed, all provided by the House of Commons."

Yes, the NDP booking a meet with a group of youth concerned about our crap environment policy, some of whom later staged a flash mob protest in the House, is all the proof I need that the NDP were behind the protest. 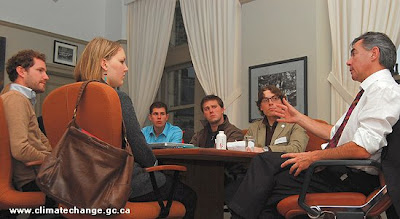 Environment Minister Jim Prentice is also seen here at a meeting on the Hill with the now infamous House hecklers. Was Prentice also behind the protest, Mr. Hill?

All this bs about blood and conspiracies makes for great telly, doesn't it? Must be very galling to the Canadian Youth Climate Coalition who put months of work into getting the word out on our mia environmental policy, only to have their message collectively ignored by Cons, Libs, and the media in favour of blood and bs.

Update : The Natty Post, The Star and the Globe and Mail all pile on with more bs about faked injuries and blurry pix. Bah. h/t Ben Powless

That blood and bs phrase also works with our "mission" in Afghanistan, doesn't it, Lady Alison ? ? ? ?

In the photos with Prentice, I see a fellow who looks just like the bloody nosed Commons protestor.
He seems to be listening very attentively.

It is the same guy, O - more pix of him with Prentice at the link.

Bob : Yeah. Speaking of which, you read that NYTimes article today on the Karzais, heroin, and the CIA?
Viet Nam, Nicaragua, and now Afghanistan. Heroin goes wherever the CIA goes.

He got bloody in the scuffle. Then he cleaned up. Then -- and this is the CBC's point -- he got bloody again for the camera.

The blood he had at 5:15 in the TV interview is NOT the blood shown here, it was faked. And regradless of whether he was injured that was deceitful.

Anon you're deceitful and faked.

That's the new talking point, Anon?
Not that the Libs did nothing on climate change and continue to support the Cons doing nothing.
Not that Canadian media condones beating up protesters in the Houses of Parliament and makes excuses for it.
Not that no one was going to speak out on Bill C-311 without that protest, least of all bloggers who support the Cons and the Libs.
No , your new bs is that this blood on his face is not the same blood that came out of him an hour earlier?

You may as well just throw up on your shoes right now and walk home.

She shoots.
She scores!
Way to go Alison!

I followed this as it developed on a couple of threads at BCL's:
http://bigcitylib.blogspot.com/2009/10/did-ndp-protesters-add-fake-blood-or.html#links

It started with Janyce MacGregor's post showing the video of them walking, then the interview with Solomon. This left people to assume his face was clean while walking and bloodied up later.

Then David Akin wrote that he had seen blood coming out of Custer's mouth inside the House, though he did not witness how Custer was hurt in the first place. The problem was that there was no photo and I for one did not realize this was the same as the later photos.

Then someone gave CBC the video MacGregor put into a second post (the one at the top of this post) showing his bloodied face before the walking video was filmed. Same blood pattern. Then I looked really closely at the walking video and thought I could see faint and fuzzy marks. Then Ben Powless posted the link to his photos in the CBC comments and that was final convincing evidence that Custer had the blood all along.

So it was reasonable to question at the beginning until more evidence came to light; the trouble is that now the lie has spread so much it will probably be impossible to root out.

I think CBC owes him an apology; MacGregor should have tried to learn more about the video of them walking before posting it, and she should acknowledge this and apologize.

Holly Stick, this story did not "develop", unless by "develop" you mean getting sucked in by Libloggers like BCerinTO and Big City Lib writing bullshit posts about "self-mutilation" and "fake blood".
I see that rather than apologise to Custer, MacGregor instead decided to link to yet another CBC story - one from Cudmore - that continues to question whether Custer faked his wounds and tries to paint the whole protest as an NDP event on the basis that a whole two out of 120 protesters have either current or past links to the NDP.
Still waiting for CBC and chronic dipper-basher Big City Lib to cough up some apologies.

David Akin, 1pm Tuesday:
"A Parliamentary Press Gallery member who is a pretty sharp reporter saw lots of blood on the hallway floor outside the Speakers Gallery and blood on the stairs leading down to the basement where I was waiting."

Yet somehow every major paper writing to this thinks the story is not about House security beating up protesters but about whether the protesters faked it.
Disgusting.

I'm sure that BCL posted the story as an opportunity to snipe at NDP partisans, but he also amended it as more evidence came to light. My point is that for me and probably for others, figuring out what happened was a process and it did develop over time.

It is possible Janyce MacGregor simply looked at the walking film and jumped to conclusions, but if so she should have acknowledged the mistake by now. It seems the CBC people are likely to assume protestors are as cynical as politicians. Or maybe they deliberately tried to discredit Custer. But incompetence is usually more likely than conspiracy. I haven't read MacGregor before and don't know how competent or biased she is.

Thanks for taking time to write up a deconstruction, Holly. Much appreciated.
The obvious reason the media went with the gotcha angle is because it's sexier, but c'mon - all of them???. CBC, Natty Post, The Star, and the G&M?
As you say, "the lie has spread so much it will probably be impossible to root out" now.

Alison: Would it be ok with you to forward this post and comments to As It Happens, BC Almanac, and/or Rabble? Briarpatch?

O, you don't ever have to ask my permission to do that.
I hope someone will do an editorial on how and why the coverage of this incident at CBC and all the major papers has been so skewed. No apologies or retractions anywhere so far.
What are they waiting for - a lawsuit?

O, on second thought, send them Ben Powless linked in update above. It's better.