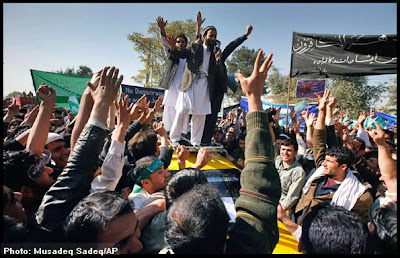 On Sunday hundreds of Afghan students and protesters shouted slogans against the US, Nato and Afghan government and burned an effigy of the President Obama during a rally in Kabul before attempting to storm the parliament building.
- updated below -
Eric Margolis : Take poor Hamid Karzai, the amiable former business consultant and CIA "asset" installed by Washington as Afghanistan's president. As the U.S. increasingly gets its backside kicked in Afghanistan, it has blamed the powerless Karzai for its woes and bumbling.
You can almost hear Washington rebuking, "bad puppet! Bad puppet!"
The U.S. government has wanted to dump Karzai, but could not find an equally obedient but more effective replacement. There was talk of imposing an American "chief executive officer" on him. Or, in the lexicon of the old British Raj, an Imperial Viceroy.
Washington finally decided to try to shore up Karzai's regime and give it some legitimacy by staging national elections in August. The UN, which has increasingly become an arm of U.S. foreign policy, was brought in to make the vote kosher. Canada eagerly joined this charade.
No political parties were allowed to run. Only individuals supporting the West's occupation of Afghanistan were allowed on the ballot.
As I wrote before the election, it was all a great big fraud within a larger fraud designed to fool American, Canadian and European voters into believing democracy had flowered in Afghanistan. Cynical Afghans knew the vote would be rigged. Most Pashtun, the nation's ethnic majority, didn't vote. The "election" was an embarrassing fiasco.
Ironically, the U.S. is now closely allied with the Afghan Communists and fighting its former Pashtun allies from the 1980s anti-Soviet struggle. Most North Americans have no idea they are now backing Afghan Communists and the men who control most of Afghanistan's booming drug trade."

Scott Taylor : "Spending millions of dollars to stage elections — and run-offs — to exercise a democratic process to appoint a U.S. puppet hasn’t fooled the Afghan people.
It’s time we stopped fooling ourselves."
.
The National Post reports a poll this morning showing Support for Canada’s role in Afghanistan has fallen below 50%.
Wesley Wark, Munk Centre : "Good news stories -- good news stories could change their opinion."
Independent : "At 6.30am Helmand time today, the words "Good Morning, Afghanistan" boomed forth from the first British Forces radio station in the country.
DJ Dusty Miller mimicked Robin Williams's greeting this morning."
.
Oct 28 Update : [h/t Pogge at Bread 'n Roses]
NY Times : Brother of Afghan Leader Said to Be Paid by C.I.A.
That would be Ahmed Wali Karzai, alleged drug lord and fixer of the Afghan election, on the CIA payroll for the last eight years. In what sounds like a scene out of the movie Traffic, brother Karzai is said to finger rival drug lords to the DEA and then take over their territories.
Also :

"The agency pays Mr. Karzai for a variety of services, including helping to recruit an Afghan paramilitary force that operates at the C.I.A.’s direction in and around the southern city of Kandahar, Mr. Karzai’s home."

Isn't that what we used to call Al Qaida?
.
Malalai Joya on Democracy Now [h/t Waterbaby]:

"You know, my people call him “Small Bush” in Kandahar province, this brother of Hamid Karzai.
And this was the main project of the CIA in Afghanistan, that under the banner of women rights, human rights, democracy, they occupied my country. They imposed these terrorists, blood and creed of the Taliban, on my people. And also they changed my country to the center of drug."

Meanwhile the similarities to Viet Nam continue. Wherever the CIA goes, the drug trade follows.
.
Posted by Alison at 4:50 am
Email ThisBlogThis!Share to TwitterShare to FacebookShare to Pinterest
Labels: Afghanistan, al-Qaeda, Canada's foreign policy, CIA, drug trafficking, Karzai, war is a racket

I was just reading that all the Nato defence ministers have given their approval of McChrystal's 'surge'. Well, that's been their job for a while now, hasn't it?

Great Democracy Now interview with the two-term Afghan parliamentarian Malalai Joya who puts the lie to so many of the spurious rationales for the invasion, occupation and 'surge'.

"Where the CIA goes, the drug trade follows." You never really know what will pop up when you play around with Search.
http://opitslinkfest.blogspot.com/2009/10/some-simple-drug-crime-surfing.html