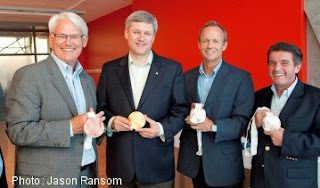 .
Campbell, Harper, Doris, and Lunn - the unbeatable election line-up with Big Owe medals.
.
We are so screwed.
.
CBC : "Vancouver's Olympic committee plans to hand out $30 million in bonuses to key staff in order to encourage them stay on until the 2010 Winter Games are finished after the Paralympics in March, rather than see them leave prematurely to find new work."
.
$30M in bonuses just to finish doing their jobs? Ha!
But they are still asking downtown businesses to donate employees to work for VANOC during the Games!
Meanwhile, the Big Owe Village required a $150-million bailout, the $1-billion security bill is 5 times the original estimate, the Sea-to-Sky Highway, Convention Centre, and RAV line are all over-budget, the province is slashing social programs, the homeless are being shipped out, and Gordo is proposing a bill to allow municipalities to remove unfestive signs from inside your home.
.
The G&M says an Innovative Research Group poll of 549 BC residents showed 71% said they were either "not very excited or not excited at all" about the Big Owe with only 9% saying they were very excited.
.
Screwed.
.
Posted by Alison at 5:42 am
Email ThisBlogThis!Share to TwitterShare to FacebookShare to Pinterest
Labels: 2010 Games, Gordon Campbell, Olympics, Stephen Harper, VANOC

And it ain't even here yet.

Wait 'til after all the hoopla is ovah.

if i have housing by then or i'm in hawaii, it's going to be mighty tempting to either post somethings on my van windows (they never mentioned vans, did they?), or a poster in my apt. window that says something like, 'eat the rich'. LOVE the 'Owe limpics'!!!!!!!

anyways....
You have been selected by me as a recipient of the 'EAwards' which demonstrates the excellency of your blog. It's meme-like suggestions are that you choose ten blogs you find excellent.

The logo for your side bar can be found at :
http://harpervalley.wordpress.com/2009/10/18/finally-i-figured-it-out/

Scout, I've left this thoroughly ungracious response at your place a coupla times but it's not showing up :
Blog memes
You got the smarty-pants filter on over there?