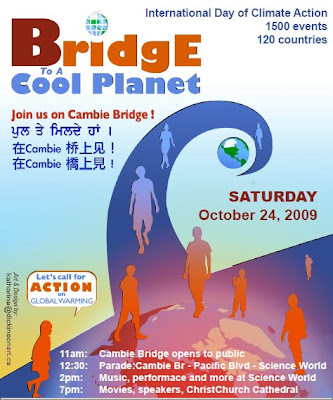 .
On International Day of Climate Action tomorrow, Lotuslanders will be meeting on the Cambie Street Bridge in Vancouver for a march parade to Science World in solidarity with thousands of other climate action events in what is now 180 countries worldwide including Antarctica. Local info here, worldwide info here. along with a map of events in your corner of the world.
.
It's already 'tomorrow' in Ethiopia where 15,000 students marched through Addis Ababa carrying signs saying "350" - the number that scientists say is the safe upper limit of parts per million for carbon dioxide in our atmosphere. Yeah, we're at around 387 right now I think.
A joint Palestinian Israeli Jordanian event at the Dead Sea will have people from each of the three countries form a human 3, 5 and 0.
.
And if walking across a bridge tomorrow accompanied by people playing salsa music with paper mache salmons on their heads doesn't seem like the way to fight a global climate disaster, consider that worldwide coordination of all these events by 350.org and its over 200 sister organizations was begun just two years ago by environmental writer and activist Bill McKibben after he decided to take a walk across his home state of Vermont.
.
Posted by Alison at 3:26 pm
Email ThisBlogThis!Share to TwitterShare to FacebookShare to Pinterest
Labels: 350.org, Bill McKibben, Environment, International Day of Climate Action

I hope so. Have a gig first in the am so it all depends on whether I can make the noon boat.
Tell drf not to wear his fuckme pumps this time ;-)- there are less painful ways to provide endorsement for Canadian healthcare.