Paying off the Taliban to maintain the occupation 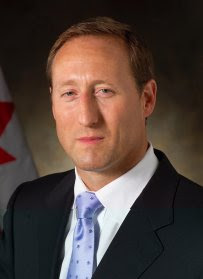 "Defense Minister Peter MacKay on Friday dismissed allegations that the Canadian military paid insurgents in Afghanistan not to attack them as nothing more than "Taliban propaganda."
"I strongly suspect that this is more Taliban propaganda. Of course, they're not bound by rules of engagement or simple things such as truth."

Unlike our Defence Minister [Vancouver Sun : please note the correct Canadian spelling] who spent yesterday pissing on "simple things such as truth" when he denied all knowledge of internal reports on Afghan prisoner abuse.
.
The allegations of the Canadian military bribing the Taliban not to attack them originated in a Times story explaining the recent massacre of 10 French soldiers as being the result of the outgoing Italian forces failing to apprise the incoming French of their monetary deal with the Taliban :

"NATO also officially denied that any of its members pay insurgents in Afghanistan for peace, but military sources said Thursday that the practice is widespread among foreign forces fighting the Taliban.
One Western military source told of payments made by Canadian soldiers stationed in the violent southern province of Kandahar, while another officer spoke of similar practices by the German army in northern Kunduz."

Whether the military is paying off the Taliban not to fight, either directly or through private contractors, it's all still rumours at this stage.
What we do know is that private contractors already pay them protection money to lay off bombing reconstruction projects and to allow supplies to reach NATO troops:

"Asked whether his company paid money to Taleban commanders not to attack them, a security company owner said: “Everyone is hungry, everyone needs to eat. They are attacking the convoys because they have no jobs. They easily take money not to attack.”

Lieutenant-Commander James Gater, a spokesman for Nato forces in Afghanistan, said that the transport of Nato supplies was contracted to commercial firms and how they got them into the country was their business.

“I can confirm that we use two European-headquartered companies to supply food and fuel, though for contractual reasons it is not prudent for us to name them. They provide their own security as part of that contract. Such companies are free to subcontract to whomsoever they wish. "

"The manager of an Afghan firm with lucrative construction contracts with the U.S. government builds in a minimum of 20 percent for the Taliban in his cost estimates. The manager, who will not speak openly, has told friends privately that he makes in the neighborhood of $1 million per month. Out of this, $200,000 is siphoned off for the insurgents.
If negotiations fall through, the project will come to harm — road workers may be attacked or killed, bridges may be blown up, engineers may be assassinated."

"One Afghan contractor, speaking privately, told friends of one project he was overseeing in the volatile south. The province cannot be mentioned, nor the particular project.
“I was building a bridge,” he said, one evening over drinks. “The local Taliban commander called and said ‘don’t build a bridge there, we’ll have to blow it up.’ I asked him to let me finish the bridge, collect the money — then they could blow it up whenever they wanted. We agreed, and I completed my project.”

In the south, no contract can be implemented without the Taliban taking a cut, sometimes at various steps along the way.

One contractor in the southern province of Helmand was negotiating with a local supplier for a large shipment of pipes. The pipes had to be brought in from Pakistan, so the supplier tacked on about 30 percent extra for the Taliban, to ensure that the pipes reached Lashkar Gah safely.
Once the pipes were given over to the contractor, he had to negotiate with the Taliban again to get the pipes out to the project site. This was added to the transportation costs.

“We assume that our people are paying off the Taliban,” said the foreign contractor in charge of the project."

And in this way Jean MacKenzie at Global Post estimates we are funding the Taliban around $1-billion a year to kill our troops, the same amount the US spends on ten days of occupation.
.
If we called the war on Afghanistan what it is - an occupation - and cut out all the middlemen - both the Taliban and the foreign contractors we support - we could pay the Afghan people directly, day to day if necessary, to rebuild their country as they see fit and let them take care of the Taliban themselves. Give some of that money to groups like RAWA. The ranks of the Taliban would be decimated, many lives would be saved, and all we would lose by turning around that 10 to 1 military-to-reconstruction ratio would be our cherished hypocrisy and the ridiculous warporning of the likes of Peter MacKay.
.
Have another look at this map of Taliban control of Afghanistan.
If it is true that the military have either directly or indirectly joined their private contractors in paying the 'enemy' not to fight, I don't disagree with it as a strategy. We're just paying off the wrong people.
.
Posted by Alison at 4:31 am
Email ThisBlogThis!Share to TwitterShare to FacebookShare to Pinterest
Labels: Afghanistan, Peter MacKay, privatizing war, RAWA, Taliban, war is a racket

I suspect you are being not quite serious here in arguing for paying Afghani's to allow us to occupy their country. Interesting idea though.

When you talk 'Afghanistan' the word clusterfuck is optimistic. The reason why is implicit in the tactics surrounding gamesmanship of The Great Game as promoted by Kissinger to use the neocons to deny Russia supply of strategic materials through a PNAC-promoted strategy as follows
http://www.gwu.edu/~nsarchiv/NSAEBB/NSAEBB207/
Related information from the file
http://opitslinkfest.blogspot.com/2009/07/documents.html
One interesting thought is that this is an Mossad/AIPAC-sponsored venture to secure oil for Israel.