Pale spells out the possible dangers of a Con majority.

Thankfully it seems Canadians don't want Harper to have one.

They don't seem to want an election before 2013 either : 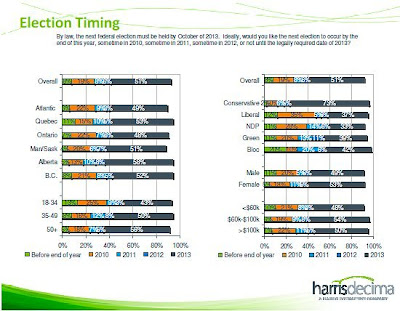 Harris Decima also polled on public support for the various positions of the opposition leaders on confidence votes :

Duceppe : Will support the budget measure because it contained a tax credit for home; after that -all bets are off

Ignatieff : Will no longer support any government measures.

"Nationally, Jack Layton’s position is the most popular, supported by almost 3-in-4 Canadians.
This position has broad appeal nationwide with no less than 66% in any region indicating they support his position on the matter. Among New Democrats, 81% are supportive of this position, while 13% are opposed. The position of the NDP leader is also supported by 70% of Liberals and 78% of Conservatives."

Totally OT here Allison but did you catch Harper's "Canada is the envy of the world" comments after the G20 summit.

The one where he announced that Canada is the envy of the world due to having suppressed any knowledge of its history of colonialism? Yeah. That Steve - such a kidder.

Lol, that would be the one.

What a doofus.
His new slogan for us:

"Canada - big enough to make some difference, too little to be a threat."