Meanwhile, out here in Manikatchewalbumbia ... 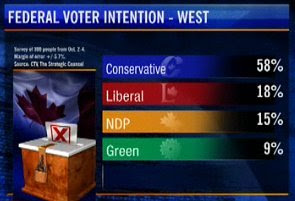 or, as Strategic Counsel likes to call all the provinces west of Ontario - The West - 300 people had their dinners interrupted on Oct 2 to 4 to be asked their federal voting intentions. That's a polling sample of, um, 300-divide-by-4-carry-the-2 = a total of 75 people per 'western' province who gave the Cons a 58% approval rating. Big whoop.
Then again if you assume that 100% of the 75 Alberta voters and most of the Saskatchewan ones polled Con, that overall 58% means a lot of people in BC and Manitoba didn't.
A total of 1000 people were polled across Canada - Quebec: 243, Ontario: 383, West: 300 - leaving Prince Novanewbrunsadorland and Nunayuktories to share the remaining 74 votes at 10 votes apiece.
Harper supporters CTV and the Globe and Mail, who sponsored the poll, were nonetheless very excited by their Canada-wide results : 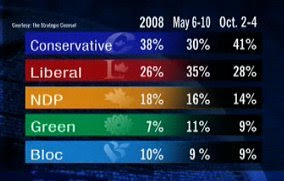 .
which they described as "devastating" for the Libs, although their numbers only seem to show that the Libs, Cons and Greens gained a couple of points each at the expense of the NDP and Bloc since the election a year ago. Trouble is those Con gains, if they exist, are in Ontario.
.
John Ibbitson of the Globe and Mail and CTV's Robert Fife both credited Harper's surge to 41%approval (compared to five months ago) to his reluctance to call an election.
Catch 22 #1- he'll lose that advantage if he appears to trigger his own defeat in order to pursue an election while his prospects are good.
Catch 22 #2 - as long as the polls convince the other parties he could get a majority, he'll be able to govern like he already has one.
.
Best line of the night on Powerplay at CTV :

"The problem for the Liberals is if the numbers continue to show the Tories in the lead, support for the Grits could continue to decline among federal voters."

The shit is winning, poop.

Who needs Cascadia? I much prefer Albumbia! Cheer up; I hung up on some pollster the other day, so did not help push it left at all.

I had to read all the way to the end before I could figure out what that Mani....bumbia was and how to say it!
Clever!
And... that video edit/overlay is a GEM!Genius award!

O : Are you still there?Momentum happenin' for Conservatives and the Taliban.
CBC news ce soir
Was this CBC story on radio, TV, or the web? More info please!

And yeah, Pale rocks the pop up video. I'm pasting a link to her version whenever I run into the original.

Holly : Hale, fellow Albumbian!
I'll get right to work on our flag.