CBC Question of the Day 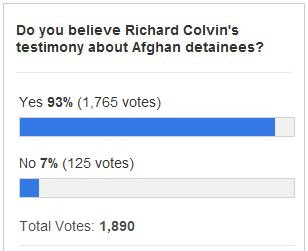 Commenter Stephen Phillips under this CBC poll has a question of his own :

"What kind of a question is this? Mr. Colvin is a distinguished career diplomat under attack by a Government that has misled Parliament and the country about prisoner transfers and is now systematically blocking the work of the Military Complaints Tribunal. The real question is this: why is the Government trying to smear a courageous whistle-blower who has put his career on the line?"

"Federal ministers Gordon O' Connor and Peter MacKay knew as of 2006 that the prisoners captured in Afghanistan were likely to be tortured in the local prisons, said Rick Hillier, former chief of staff of the Canadian Forces.".

"Michael Semple, former deputy head of the European Union's mission in Afghanistan when Colvin was second-in-command of the Canadian embassy, said his own records from his time in Kabul are littered with the same findings that the senior Canadian envoy shared with a House of Commons committee this week."

Once newspaper reports in April 2007 brought the problems to light, Colvin said he was instructed to keep quiet by David Mulroney, a senior official who had responsibilities to report on Afghanistan to Prime Minister Stephen Harper, then foreign affairs minister Peter MacKay and Gordon O'Connor, who was the defence minister before he became the first political casualty of the detainee scandal."

Michael Byers has an article at MaCleans.

Byers has only been trying to bring this to our attention for 3 years and 7 months now.

Hillier knows a lot about who should have read those memos for a guy who claims to have been clueless about their actual existence.

Where's the poll asking people if they think Mr. Hillier is a liar?

The CBC has been a cheerleader for Canada's involvement in the Afghan invasion from the very beginning. It is naive for any of us to expect them to take a critical stance this late in the game. If anything we should expect them to be doing exactly what the gov't is doing: deflecting responsibility, and denying having known about it the torture.