Porking out at BC Ferries 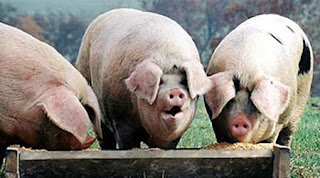 Posted by Alison at 3:35 pm
Email ThisBlogThis!Share to TwitterShare to FacebookShare to Pinterest
Labels: BC Ferries, David Hahn, public trough

Will remember this next time the 6;30 am ferry sits in Long Harbour waiting for a crew member.
And waiting for them to supply crew members with cell phones/blackberry to compute # of foot passengers so they can put it into their system and then we won't have to go all the way upstairs and get inline with footpassengers enroute to Vancouver just so we can get a boarding pass, while juggling luggage and/or children and many of us have complained year after year about this.
and when the elevator is out of commission for more than a week.

How many times have we seen this?
Downsize the workforce, sell off the asset, and import some overpaid fuckheads to run it into the ground.