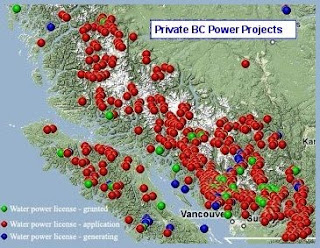 Gordo's four new "greenwash energy advisory task forces" will have just two months to come up with the goods to make running air-conditioners in California the "cornerstone" of BC's renewed green energy revolution.
.
"If you can do it faster, great," he said from the the B.C. Independent Power Producers' annual conference.
.
For the environmental perspective, we now go to environmentalist activist Tzeporah Berman, IPP lobbyist and executive director of Power Up Canada :

"The short timeline shows that they are committed to sending the right signals to the investment community, which is incredibly important because other jurisdictions are beating us to the punch."

Tzeporah Berman, economist Mark Jaccard, and David Suzuki worked really hard to support Gordo's re-election this year, presumably because Gordo's environmental policies of gutting the BC Environment Ministry, supporting fish farms, building the Gateway Pacific and twin Enbridge pipelines from the Alberta tar sands to Kitimat, exporting BC coal to China, expanding the oil and gas industry in the north, building more roads and bridges instead of light rail and public transit, and passing a bill to prevent municipalities from having any say in local run-of-river projects ... is but a small price to pay in exchange for forcing the publicly-owned BC Hydro to buy electricity at above-market rates from the private IPP run-of-river schemes stocked with former Liberal officials and advisors, in order to export that power to the US.
.
No word yet as to whether they will be on Gordo's new energy task forces, but we do know that David Emerson of Project North America will be on the committee receiving their submissions.
.
Posted by Alison at 2:00 am
Email ThisBlogThis!Share to TwitterShare to FacebookShare to Pinterest
Labels: David Emerson, Environment, Gordon Campbell, privatization, run-of-river, Tzeporah Berman