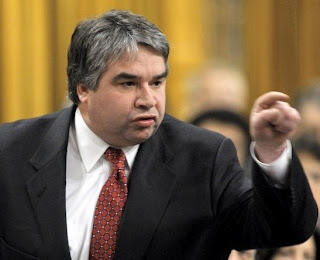 On Thursday, a reporter doggedly tried to wring from Public Safety Minister Peter Van Loan exactly how long he sat on the RCMP's Firearms Commissioner's Report in favour of keeping the long-gun registry so that MPs would not have that info prior to passing the bill to scrap it. The report was released two days after the vote.
I've omitted PVL's initial 12 responses here as they bore no relation to the question asked but the entire interview is a quite extraordinary read:

Peter Van Loan: It's - I received it and looked at just recently, in recent days."

"Responding by email to questions from the Star, RCMP Sgt. Greg Cox said late Friday the force submitted its 2008 firearms report on Oct. 9, four weeks ago."

As the dogged reporter - who was that woman? - put it : "That was totally useless. Thank you."
.
Good article from Harper Index : Gun control politics revised Canada's political map
.
Posted by Alison at 11:38 pm
Email ThisBlogThis!Share to TwitterShare to FacebookShare to Pinterest
Labels: long-gun registry, Public Safety Canada, Van Loan

Somewhere over the weekend I heard the audio of that exchange.

The female reporter was tenacious, got to give her credit.