I reckon we've had just about enough of this bullshit 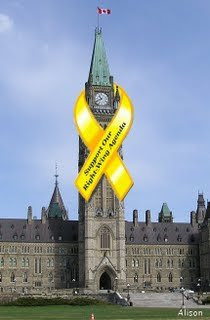 Shorter Harper : If you point the war crimes finger at me, I'll deflect it at the troops.
Faced with mounting condemnation for government ass-covering over Richard Colvin's testimony about Afghan detainees, Harper resorts to an oblique slight-of-tongue blackmail :

"There were allegations of Canadian troops involved in torture. We’ve been very clear that's not the case."

So who is pointing fingers at the troops?
No one. No. One. But. Steve.

Least of all Richard Colvin, as he made abundantly clear right away at the beginning of his Nov. 18th testimony before the Committee on the Canadian Mission in Afghanistan :

"I was very proud to have served in Afghanistan alongside the courageous and professional men and women of the Canadian Forces, including Canada's military police. The focus of our attention, in my view, should not be on those who obeyed their chain of command, which soldiers are obliged to do. Instead, any responsibility for Canada's practices toward detainees lies, in my view, with the senior military officers, senior civilian officials, and the lawyers who developed the legal framework, designed the policies and practices, and then ordered that they be implemented."

In condemning with the same brush highly professional Canadian soldiers, and to complain that they were complicit in breaches of the law of armed conflict and knowingly buried his reports, it is Mr. Colvin who has some explaining left to do.

but certainly clear enough for anyone not looking to turn Colvin's words upside down and pretend that any criticism of the HarperCons and their public service camp followers equals a danger to the troops and military police, as Harper does here today:

"... in a time when some in the political arena do not hesitate before throwing the most serious of allegations at our men and women in uniform, based on the most flimsy of evidence, remember that Canadians from coast to coast to coast are proud of you and stand behind you, and I am proud of you, and I stand beside you."

Steve bravely champions the troops by hiding behind them and pointing a finger at them.
Are people gonna fall for this bs?

while Contrarian takes down Blatchford.
And yes, why was Christie Blatchford leaked information deemed too sensitive for the Parliamentary Committee on the Canadian Mission in Afghanistan?

Since when is Blatchford entitled to read documents that the MPs on the committee questioning Colvin are not entitled to see?

Methinks someone has violated the laws on confidential information.

I think BCer in Toronto has the best headline: http://bcinto.blogspot.com/2009/11/harper-uses-our-troops-as-human-shield.html

Scott Taylor describes MacKay's similar behaviour: "...When that tactic failed to score a hit, MacKay wrapped himself in the flag, curled up in the fetal position and pleaded for everyone to "stop attacking his soldiers."..."

There's another thought that comes to mind. In Afghanistan, there has been rapid shuffling by German generals. They actually prosecute War Crimes in Germany. I expect Canada too is signatory to resolutions the Yanks put across at Nuremberg for everyone to obey to stop torture on pain of death.But in Canada... any bets no 'enabling legislation' has been passed to stop legal processes designed to serve international warrants on those guilty of facilitating rendition and the like ? Dance, politicians, dance...