Dragging the goalposts right off the field 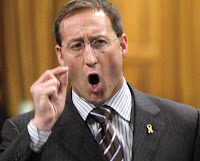 Then : October 19, 2009
MacKay seeks answers on torture memos
"MacKay said Monday that neither he nor his deputy minister ever saw diplomat Richard Colvin's reports, which were circulated widely within the Foreign Affairs and National Defence departments, as well as among senior military commanders."
.October 16, 2009
MacKay denies seeing Afghan torture reports

"Defence Minister Peter MacKay says he never saw a former diplomat's reports containing allegations of torture of detainees transferred by Canadians to Afghan prisons. MacKay, who was foreign minister at the time, insisted Thursday that he knew nothing of the documents.

"I received briefings from the deputy minister and there were attachments to which Mr. Colvin was a contributor but I have not received direct reports from Mr. Colvin," MacKay said."

Scrape ... scrape ... scrape...
.
And then there's the Generals. Rather than bother dragging their goalposts off the field, they just declare them invisible. I posted this at The Beav earlier:
From Richard Colvin's reports beginning in May 2006 :

"Three generals declared Wednesday that there was no mention of the word "torture" in reports from a senior diplomat who asserts that he repeatedly warned the government against surrendering Afghan detainees to local authorities because they would almost certainly be abused.

One of the recipients of the widely distributed reports, which Colvin says were copied to 76 government and military personnel in Ottawa and Afghanistan, was retired Lt.-Gen. Michel Gauthier, who was then the head of oversees deployment. Gauthier told the Commons committee that none of Colvin's 2006 reports, including his May document, mentioned anything about torture.

Retired Gen. Rick Hillier, Canada's top soldier during Colvin's posting in Afghanistan in 2006-07 : "There was simply nothing there."

So there you have it - because Richard Colvin neglected to include the word "torture" in his accounts of detainees allegedly being "whipped with cables and shocked with electricity", there was no torture and the generals apparently feel justified in having failed to read his reports in the first place.
.
Meanwhile look for those reports under the goalposts.
Initially Harper promised to release Colvin's reports to the Afghan committee, a parliamentary committee, who so far are asking witnesses questions about reports they are barred from seeing. Wait for it...
Feds bar whistleblower diplomat from handing over torture documents to MPs

Defence Minister Peter MacKay said the government intends to comply with the order to produce documents, but tempered expectations by saying the records will pass through several filters before they get to MPs.
"Anything we're legally required to hand over, we'll hand over," he said Wednesday.
"We have to, of course, respect the Canada Evidence Act, The National Defence Act and rules pertaining to disclosure. And of course anything having to do with national security will have to be vetted."

Those are the same arguments the government made to the Military Police Complaints Commission, whose public hearings into the same issue were derailed by legal wrangling. The government took a year to censor and hand over records to the watchdog agency and at one point stopped releasing documents entirely.

MacKay did not explain how the Justice Department could ignore Parliament's authority when it comes to providing evidence.

The committee will now hear more government witnesses free to spout the same crap as the generals because there will be no evidence to refute it -- and the press, barring actual reporters like Murray Brewster and Tonda MacCharles, will, in the absence of any other story, report it all faithfully.
.
Posted by Alison at 8:10 am
Email ThisBlogThis!Share to TwitterShare to FacebookShare to Pinterest
Labels: Afghanistan, Peter MacKay, Richard Colvin, torture

September 19/2009 Montreal Gazette has the article plus photo of our dear Peter and a quote from him in June.
(sorry but my cut and paste isn't working)