"Canada's back on the world stage" 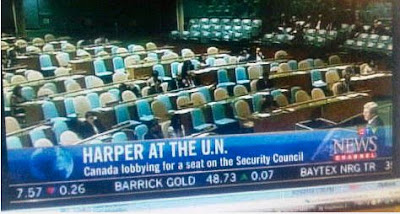 It would seem that such international policies as

1) unstinting support for everything Israel
2) actively undermining the Copenhagen summit climate talks
3) delaying debt relief to Africa to advance the interests of a Canadian mining company
4) flip flopping hostility to China
5) snubbing an International Aids Conference held in Canada
6) cutting funding to the United Nations Relief and Works Agency
7) refusal to sign the UN Declaration on the Rights of Indigenous Peoples, and
8) blowing off UN talks on nuclear proliferation, global peace and climate change in favour of a photo op at a Tim Hortons

do not ultimately translate into votes for a seat on the Security Council at the UN after all.
Who knew?

Wanker ? Loser.
Did you pick up on the bit where the Danes alerted delegates to a planned substitution of position papers at Copenhagen which would have led to support of an agenda which would have not only instituted a global tax on the use of fire, but levied it more harshly on third world countries ?
No ? All sorts of silly things surfaced when I decided to keep a file of odd 'climate' news and views.
http://opitslinkfest.blogspot.com/2010/03/climate.html

Someone's off his meds.

Opit, there's over a hundred links at your link above. Can you pinpoint the one alluding to a move to institute a global tax on the use of fire?
Thanks.