So how are we all doing then?

Positive, snappy, and it's a movement linked to at Cerberus.
Not entirely my thing, as I probably would have been just as happy with :

A few days ago Canadian Cynic was a tad concerned about the Blogging Tories, as were Dr Dawg and The Amazing Wonderdog , so let's have a look in on them now :

Hmmm, not so good. So who moved their dish?

Why just last week the 101st Fightin' Keyboarders, Canadian Division, were all happy about Harper and the wars in Afghanistan and Iraq, plus of course they still have the one in Iran to look forward to. But now, at the first whiff of fertilizer, suddenly it's as if they've just realized the abyss can see them in their jammies.

So given that June the 2nd Changed Everything for them, I made up a spiffy new graphic to replace their old one: 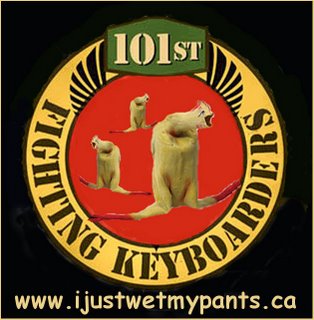 Sadly I didn't have any chickenhawks handy so I was obliged to substitute rubber chickens instead, but I don't think anyone will notice the difference.

;-) to Canadian Cynic for the idea

Posted by Alison at 9:27 pm
Email ThisBlogThis!Share to TwitterShare to FacebookShare to Pinterest

Not entirely your thing, Alison?

OK - not even remotely my kind of thing. Reminds me of "These colors don't run", which would be bad enough on its own but as you astutely pointed out: www.nothinghappenedalready.ca

On the other hand, if its intended use is to promote multiculturalism to counteract the 101st's racism, good for them.
Just as long as I don't have to go.

Alison, this is really spectacular. You've really outdone yourself! (So glad I "discovered" your blog.)

Awesome. I'm tempted to buy ijustwetmypants.ca but I spent $10 on saskblogs.ca the other day.

Very well done, very well done indeed! While I have not been a commentator at your site I have enjoyed many posts you have written. This though just left me crying from laughing so hard and I thank you for that as well as doing so while making a very serious and important point about fear itself. Especially the fear which so many of the "kill them all over there and let God sort them out" suddenly felt when they realized that this could happen to them in their own homes just as much.

Why is it so hard for some people to understand that when one advocates (and especially after one commits it) violence against others it almost always ends up being visited back upon those doing so? Even when it is in true self defence this tends to be true which is why some of us tend to not want to use any more force than is the absolute minimum to fight a conflict. It is not out of some sympathy for those being targeted but to minimize any backlash down the road as well as showing that while yes we will fight to preserve our way of life/beliefs that we will not do so gratuitously nor take delight in the necessity.

The best way to show one is not afraid is simply to act it, not to draw attention to it like this movement of Kinsella's some have endorsed IMHO. This feels a little too much like the same sort of behaviour of bullies that are aggressive to mask their own cowardice to me for me to be comfortable with it.

Are you sure there's only moisture in them thar trousers?

like a hawaiian friend commented about a short little guy walking around with macho stance - arms flaired out to indicate big muscles, 'his balls are under his arms'.

maybe there's too many running around with balls for brains.

Hmmm, looks like Saskbot ripped your idea here and is getting all the credit.

Hey Jan, see that hat tip to Canadian Cynic above?www.iwetmypants.ca was his idea and I should probably have made that clearer.
Saskboy stated his intention to do something more with it right here in the comments first and he did link here.
So I think we're all good.

OK, it's www.ijustgottagetsomesleep.ca for me.

I added CC to the latest entry about ijustwetmypants.