About that "one NA security perimeter" thing... 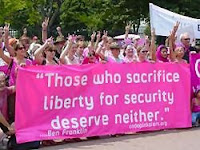 WASHINGTON - October 3 – Two well-respected US peace activists, CODEPINK and Global Exchange cofounder Medea Benjamin and retired Colonel and diplomat Ann Wright, were denied entry into Canada today. The two women were headed to Toronto to discuss peace and security issues at the invitation of the Toronto Stop the War Coalition. At the Buffalo-Niagara Falls Bridge they were detained, questioned and denied entry.

The women were questioned at Canadian customs about their participation in anti-war efforts and informed that they had an FBI file indicating they had been arrested in acts of non-violent civil disobedience."

Politics'n'Poetry has the rest of the story.

CODEPINK : Women For Peace began on Gandhi's birthday in 2002 in response to the ramp-up to the Iraq invasion.

Maybe it's all that pink that scares 'em.

Posted by Alison at 10:47 am
Email ThisBlogThis!Share to TwitterShare to FacebookShare to Pinterest
Labels: CODEPINK, SPP

So Alison, are you a card-carrying member of Code Pink?

"drf" and I are probably going to join them, the ACLU, Council of Canadians, etc. as soon as we get the "you know what" in hand.

And aren't we now sweeping the streets in Resisterville as well?

WEB : I'm not actually, although I applaud their ends. I just thought it was crap that Canada now brandishes an FBI list to bolster its authority to refuse entry to civil disobedience types.
Of course we adore those civ disses who pose no threat to our USer overlords. Nelson Mandela, for instance, is an honorary Canadian citizen. I wonder what he'd think of this.

Ross : Yeah but we've been here before.

You got it...flashing all that pink around brings out those suppressed issues with the right :)