Steve and Sandra and the Throne Speech 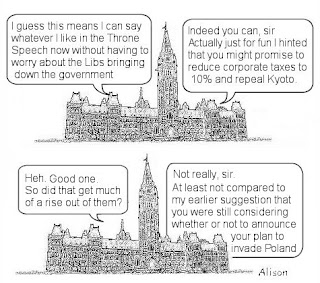 G&M : Liberals may let Throne Speech pass, Dion says
"The trigger for a fall election will not be pulled this week, provided Prime Minister Stephen Harper's Throne Speech is not outrageous, radical and very right-wing," said Liberal Leader Stéphane Dion yesterday.
CP : "The Harper government believes the Liberals are so desperate to avoid an election that they'll accept a speech describing Kyoto climate-change targets as unattainable."
The same CP link above also provides this :

"During his speech to the Economic Club of Toronto, Dion dangled a pre-election carrot to the well-heeled crowd - vowing to further reduce the federal corporate tax rate, which fell from 28 % to 19 % under the previous Liberal government.
The Liberal leader pointed out that the Conservatives have only promised to reduce the rate to 18.5 % by 2011, and said the Liberals "want to go deeper."

Fucking ConservaLiberals.
H/T : Accidental Deliberations
Posted by Alison at 6:37 am
Email ThisBlogThis!Share to TwitterShare to FacebookShare to Pinterest
Labels: ConservaLiberals

Sigh. Yeah. It's upsetting. But of course it's all about polling trends and risk assessment, and principle be damned.

Sadly, there aren't a lot of alternatives on the Federal front these days, ever since smilin' Jack decided that slagging the Liberals to preserve his position as kingmaker was oh so much more important than actually standing up against the Conservatives.

They all suck. And I say that as a card-carrying Liberal.

(any chance of digging up Trudeau and cloning him?)

Interestingly, Garth Turner's got a poll up on his blog asking his readers how they would vote. So far it's running about 56% in favour of immediately voting against the Throne Speech and bringing on an election.