Steve and Sandra Get It Right, Alberta! 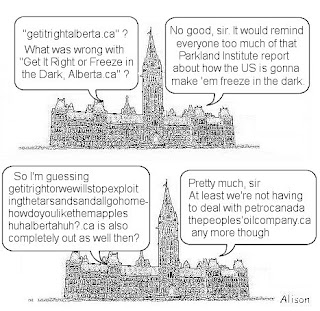 Reuters : "International oil producers will flee Alberta if the Western Canadian province's government implements a proposed hike to oil and natural gas royalties and taxes, according to Tristone Capital Inc, an investment bank that serves the oil and gas industry."
HA-HA-HA-HA-HA-HA-HA-HA-HA-HA
Say, what ever did happen to PetroCanada, the peoples' oil and gas company?
1975 : "Trudeau wanted Canada to be less dependent on the United States. He lobbied for increased Canadian ownership and protection of the country's resources. Creating Petro-Canada in 1975 was part of that plan. The Crown-owned company would develop and control Canada's presence in the energy sector."
1991 - Mulroney begins process to privatize Petro-Canada
Oh yeah, right.
Reuters quote from Eugene : Alberta needs a Chavez
Daveberta does a link round-up.
Previous post on getitrightaberta.ca below
Posted by Alison at 6:25 pm
Email ThisBlogThis!Share to TwitterShare to FacebookShare to Pinterest
Labels: Alberta, getitrightalberta.ca, Mulroney

and the 'wheat roots' may just buy it...because they have before. we lived in alberta for five years and it felt like political prison (save for the giant ndp signs we'd have erected on empty lots :D ).

Ha..and where are they going to flee to? Its not like they can take the oil with them? Move them to South Dakota, and see how good business is with no royalites and NO OIL.