What was our safe word, again? 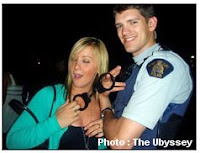 An RCMP officer offers a quick demonstration in safe handcuff handling while possibly under the influence as part of their new Off-the-Cuff Curbside Community Outreach Program at UBC.

Back at headquarters, senior brass who had apparently not been previously apprised of the popular new 'off-the-cuff' program were quoted as being "very concerned about the case and are taking it seriously."

The demo was humourlessly observed by a disapproving fourth-year UBC business student who apparently failed to see the irony in his statement :

"I said, just loud enough so they can hear me, 'This is the most unprofessional thing I have even seen,'" Kovac claimed.
The two RCMP officers continued to take photos for 10 minutes and only stopped long enough to ask Kovac to pour out his drink, he said.
"So I poured it out and then he went right back to posing with the girls," Kovac said."

Posted by Alison at 8:58 am
Email ThisBlogThis!Share to TwitterShare to FacebookShare to Pinterest
Labels: humour, RCMP

Doesn't look like any of the parties involved were in need of a safe word by the smiles all 'round . . . .

And you have the nerve to suggest women are persecuted in this country.

For every woman in jail in this country there are 49 men and with this article I can see why. Shame on you, Alison, for participating in the scam of feminism. We will remember this when The Backlash goes down.

Anon in Niagara Falls, this is your last warning.
Get yourself a handle or from now on I'll just block all comments from your IP.

Ok, Q, that's pretty cryptic even for you.
Who is Rosebud - aside from being a sled I mean?

Rosebud is our safe word? Just an off the cuff remark.
Ok, Gore Vidal suggested it re Orson Welles and it's far from being a sled ;)