Steve and Sandra - I am so the boss of you 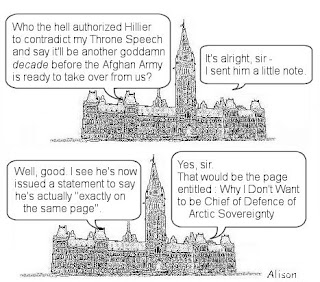 Steve says 2011 in the throne speech.
Hillier says :"Afghanistan's army could need 10 years before it's in a position to fend for itself."
Dave says : "If anyone knows what it takes to train an army, it's Sandra Buckler."
In his non-retraction retraction, Hillier says : "I'm very clear on where the direction comes from. … We're on exactly the same page and I believe actually we see things exactly the same way."
He doesn't scale back to 2011; instead he implies that Harper also knows it will take another decade.
So either the war on Afghanistan is a bad idea and the sooner we get out the better, or the reconstruction is a good idea and we should stay till it's done. Picking the date 2011 merely fulfills our duty to NATO and has fuck all to do with what's good for Afghanistan.
Posted by Alison at 1:29 am
Email ThisBlogThis!Share to TwitterShare to FacebookShare to Pinterest
Labels: Afghanistan, Hillier, NATO, Steve and Sandra

Hi Allison,
Our query to Harpoon on this asked if he read any Tennyson.
Nice response from Buckler advising a mixture of Zanax and Shiatsu for tightness in shoulders.
You go, Gurl,
gavin

We knew you could do it.

Must be that (gnu)Rovian Reality....