I can has cheezburger removr? 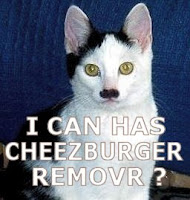 The Consumerist takes on Complaint Remover, a company that advertises it will rid the internet of "defamatory" and "negative links" about you.

How? Apparently "by positioning links on the Search Engines and by appeals to law to remove negative information. We send cease and desist letters and if necessary, file legal actions against the perpetrators and Internet service providers contributing to the unjust defamation of our members".

Holy googlebomb! Does the worst president ever know about this?

"Hello My name is Kelly. Is there something I can help you with today?

Consumerist : Does your company work on all of the internets?

Kelly: Yes we remove negative links from all erch engines google or aol, or yahoo

Consumerist : How does that work? How are you able to get another company to get rid of something that's part of their business?

Kelly: We push the negative links back in serch engines so nobody will see that ones

Consumerist : So you like make new internets and push the bad internets down?

Consumerist : My keywords are lolcats. I have a cat breeding business and people keep making pictures of cats with derogatory phrases on them. It's hampering my ability to attract new clients

Kelly: just a seccond please. ok wich one of those you want to be pushed back ?"

Oh noes. But what about the unfettered democracy and free speech of the intertubes? And spelling?

Commenters at Boing Boing and The Consumerist go to work pranking CR and uncovering IPs and holy shit! this version of CR is a giant ethical leap forward from an alleged previous incarnation which included sending nasty death threats on behalf of its "members".

Go read the rest. Why? Well, because it's very funny, especially the commenters' forays into the CR chatroom, but also because if The Consumerist story gets enough hits, anyone googling up Complaints Remover will continue to get The Consumerist instead.

I luvs teh intertubes. Srsly.

Posted by Alison at 9:59 pm
Email ThisBlogThis!Share to TwitterShare to FacebookShare to Pinterest
Labels: Blog Memes