IOC goes for the gold in the Darfur and Tibet events 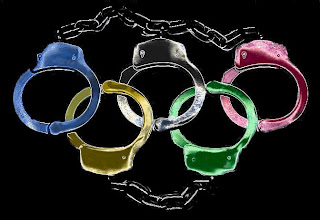 The Star : "European Union sports ministers and Olympic committees said yesterday that they would not support calls for a boycott because they're not effective and that sports and politics should not be linked, a position echoed by the Canadian Olympic Committee's top official.
"I think particularly to use the athletes who have made so many sacrifices, to use them as pawns in a game that is politically, idealistically and socially very complicated would be unfortunate," said Chris Rudge, CEO of the COC. "I don't think we can ask one constituency, which are a force for good, to stand up and act on everyone's behalf."
Yes, it would be terrible if athletes were used as pawns, wouldn't it, Chris?
Because as we all know, the Olympics is all about running and skipping and jumping, and not at all about Coca-Cola, McDonald's, Adidas, and General Electric putting up millions to increase their market share in China.
Well, you know what they say : You can catch more flies with money than with vinegar.
Posted by Alison at 6:15 am
Email ThisBlogThis!Share to TwitterShare to FacebookShare to Pinterest
Labels: Five Ring Circus

Given that they are the ones that are going to make all the money off the extravaganza coming to our town, why don't they pay for all the chair lifts, curling rinks and speed skating ovals so that we can spend our money on, oh, I dunno, housing, education, and healthcare.

Oh Ross, you crazy radical, that wouldn't work. You have to let the market decide whether or not we need those things.