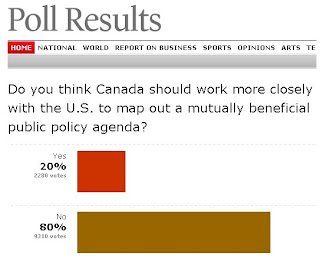 An update on yesterday's Globe&Mail poll :
80% of 11,590 G&M respondants - at one vote only per IP - are not too keen on the whole deep integration "mutually beneficial public policy agenda" thing. Yeah, us! The poll was still open for voting , last time I looked.
And in a fortuitous coincidence, right across from the poll and linked on the same G&M page is an opinion piece from ubiquitous deep integration media darling Michael Hart and William Dymond, who proudly inform us they are "former officials involved in the negotiation first of the Canada-U.S. free-trade Agreement (FTA) and then of NAFTA".
You'll recall Michael Hart of Carleton U., a former official at Foreign Affairs and Int. Trade and sometime deep integration teacher at the North American University, from his February piece in the Natty Post : Canada blew it! :

"The crisis of Sept. 11, 2001, provided a perfect opportunity to seize the moment to re-imagine the border, but Canada blew it."

in which he bewailed the loss of this unique opportunity to implement "the structural and institutional changes of deep integration" because of "nationalist phobias". Silly us.
Perhaps you also recall his statement to the Int. Trade Committee on SPP in May last year :

"We have made a political choice that we wanted a more deeply integrated North American economy," Hart said. "That means a willingness on our part to, for example, strengthen the perimeter around North America in order to deal with security issues that are uppermost in American minds."

In their new G&M piece, "The sabre-rattling on NAFTA is worrying, but take it as an opportunity", Hart and Dymond warn that "If our neighbours elect a Democratic president, Senate and House on Nov. 4, things could get ugly", but then take some comfort that unlike Paul Martin, whose relationship with the US was marked by "petulance and prickly self-righteousness", at least "the Harper government brought maturity and perspective".
Well ok then.
They then pose a number of questions to us, most notable for the facility with which they replace the word "Canada" with their preferred term, "North America" :
"What can we do together to promote our common interests in the security of the Arctic, the sustainable exploitation of Arctic energy supplies, and environmentally responsible navigation through Arctic waters?"
"What kind of legislative and other programs can we pursue in order to ensure long-term North American energy security?"
"What kind of institutional capacity do we need to have in place to facilitate and promote the governance of North American economic and security concerns and to ensure appropriate co-operation at the state/provincial and legislative levels?"
Gosh, Mike, Bill, I'm guessing your answer to the questions is whatever you quislings decide to call the next incarnation of the SPP, but our answer is right up there at the top in those G&M poll results.
Posted by Alison at 2:37 am
Email ThisBlogThis!Share to TwitterShare to FacebookShare to Pinterest
Labels: arctic sovereignty, deep integration, Michael Hart, NAFTA, polls, SPP

I'm actually disappointed the result came out at 80/20 ... I'd have thought there were only maybe 5% of 'Canadians' who thought that way Alison. Perhaps Mike and Bill were running around the office voting multiple times with different IPs...or maybe some of the trolls who spammed Ross K a week or so ago are impersonating Canadians.

Watching it, it looked like, perhaps, that it did get freeped....Maybe by the same folks that almost put the StealthCon candidate over the top at the last minute in Vancouver Quadra?