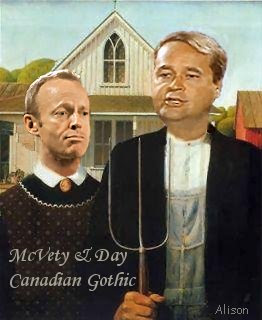 Impolitical reports that blowface evangelical crusader Charles McVety, president of the Canada Family Action Coalition, is claiming credit for Bill C-10, an omnibus bill now before the Senate that would allow the federal government to deny tax credits for films that are "offensive or not in the public interest".
Or as McVety puts it : "films promoting homosexuality, graphic sex or violence"
So I guess a Canadian remake of that conservative values homo-erotic snuff film classic, "The Passion of the Christ" would be completely out then, would it?
Way to go, Chuck. Get that message out there before it clears the Senate!
McVety said "his lobbying efforts included discussions with Public Safety Minister Stockwell Day and Justice Minister Rob Nicholson, and "numerous" meetings with officials in the Prime Minister's Office", and "a number of Conservative backbench members that do a lot of this work behind the scenes."
Seems the amendment was tucked into a finance bill and no one who works 'front of House' had read it.
But now, thanks to the grotesque vanity and eternal grandstanding of Charles "The bible interprets itself" McVety, we will have time to contact our MPs and ask whether they are part of McVety's little support group, and if not, just what the hell they are prepared to do about it.
"Films promoting homosexuality" indeed.
Bloggers and friends, start your letters.
Update : Nice to see that letter writing still works.
From Dead Things ON Sticks an as yet unconfirmed report that C-10 may already be limping its way back to committee.
Couldn't have done it without your blowtard help, McVety!
Posted by Alison at 3:55 am
Email ThisBlogThis!Share to TwitterShare to FacebookShare to Pinterest
Labels: censorship, McVety, Stockwell Day

Sure am glad to know who is wearing the pants in that family.

Both of them are 'pants', Ross.

Priceless. A work of art, Alison.