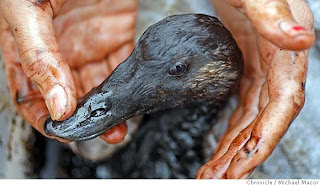 According to CBC, the tarsands company Syncrude has pleaded not guilty to two charges laid in the deaths of what was originally reported as 500 ducks but later turned out to be over 1,600 ducks in their northern Alberta tailings pond in April 2008.
.
According to Syncrude's lawyer Robert White, the company is pleading not guilty because it has improved duck deterrence measures used at the site :

"The law has recognized for a long time that when people do their best to avoid something, then that isn't a matter for charges. That's a matter for fix-up."

Ah. So according to Syncrude's "fix-ups" logic if you should fail to avoid blowing someone's head off with a shotgun, then it isn't a matter for charges - it's a matter for taking a firearms class afterwards.
Good to know.
.
Back in June Syncrude, the world's largest producer of synthetic crude from the tarsands, was threatening to challenge the federal government’s constitutional right to charge the company at all. Whether today's 'not guilty' plea is the first step in this constitutional challenge I do not know.
.
"Fix-ups". For those times when you're just too big busy to pay a possible maximum fine per charge of $500,000.
.
Posted by Alison at 12:51 pm
Email ThisBlogThis!Share to TwitterShare to FacebookShare to Pinterest
Labels: 1600 dead ducks, oil bidness, Syncrude

Say, how are the Exxon Valdez appeals cases over the last 20 years doing?

a-and it's not just ducks eh? there's the residents of Fort Chipewyan too.

"The residents of Fort Chip..." they have fished Lake Athabasca for thousands of years ... (Chip is the oldest continually settled spot in N. America) - and now the only place they can land safe fish is in the lower eastern quadrant, in Saskatchewan - as far away from the out flow from the Athabasca River and the oil sands as possible.

(Not that Sask is pure in word and deed, their uranium mining has endangered the north east quadrant.)

Ian : Still in appeals I believe.

Remind me, David, Thwap, who did the G&M endorse in the last two elections again?