From the office TARDIS at VANOC 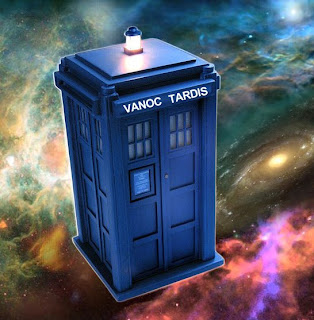 Thanks to the handy Time And Relative Dimensions In Space machine in the downtown offices of VANOC Central, Ron Judd at The Seattle Times received "an entire day's Olympic torch-relay events in great detail before they ever happened."
Naturally the TARDIS was unable to predict every single detail and Judd's copy contained the usual number of space/time anomalies :

"VICTORIA, Oct. 30 /CNW/ - The Vancouver 2010 Olympic Torch Relay is officially underway with Him/Her revealed today as the first torchbearer to hold the Olympic Flame aloft on Canadian soil at the start of the historic 106-day journey celebrating Olympic Spirit and Canadian pride from coast to coast to coast.

OK, so the office TARDIS isn't perfect and Judd was left to fill in some blanks by himself.
But despite all those XXX's, it did manage to capture some exact quotes from the future :

"The flame embodies the Olympic ideals of excellence, friendship and respect. These values resonate deeply with all Canadians," said Stephen Harper, Prime Minister of Canada, as he welcomed the flame at the public ceremony in downtown Victoria."

as well as the future emotional tone of the event :

about an event which hadn't happened yet.
.
More VANOC TARDIS reports to come as they become available.
H/t Dave
.
Posted by Alison at 5:30 pm
Email ThisBlogThis!Share to TwitterShare to FacebookShare to Pinterest
Labels: 2010 Games, John Furlong, media, Owelympics, TARDIS, VANOC

Wow, the detail in that TARDIS report is simply amazing. No wonder they are so over budget.