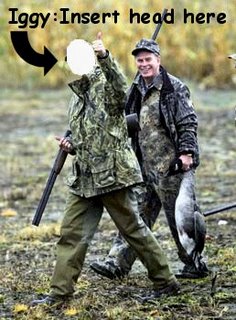 Time for Iggy to go Canada goose-hunting and get photographed with someone else carrying out his kill for him. Anything to put him out of our misery.
Following Iggy's fierce lobbying on behalf of continuing the war in Afghanistan, Harper crossed the floor to shake his hand. Now that Harper has propped up Iggy's stand on Quebec/Quebecois as a nation, will Iggy cross the floor to shake Harper's hand?
Good going, fellahs. Yes, I know you said Quebecois nation and not Quebec state but what are the separatists going to hear? Am really looking forward to also hearing from the Alberta Nation, the Atlantica Nation, the Family Nation....hell, Alien Nation and Fast Food Nation too. IndIggNation. Damnation.

UPDATE : Good round-up of reactions at My Blahg
Posted by Alison at 6:02 am
Email ThisBlogThis!Share to TwitterShare to FacebookShare to Pinterest

Yes, I know you said Quebecois nation and not Quebec state but what are the separatists going to hear?

What does that matter? What do we care what separatists think? 66% of Quebeckers already consider themselves to be a nation, how does the federal government recognizing this lead to more of them voting for separation, when they wouldn't vote for it without the recognition?

What a prat you are, Oaf.
(How old were you in 1995 btw?)
The Bloc is already responding that Quebec is a "nation without conditions".
Do you feel any support for the idea of Canada, or do you only support Harper?

Alison : You have to hand it to Harper - he now owns the Libs as well as the Cons.

I don't know what a prat is, but judging by your tone, I assume it's negative.

All I'm saying is that I don't see the logic behind arguing that this recognition will lead to a referendum sooner than one would have come anyways. And calling me a 'prat' does little to change my mind.

Seriously, I just asked a simple question, and automatically I'm an immature, pratish, traitor to the nation who would do anything to please my master Stephen Harper. Weird.

This would be a terrible thing for Canada.

My compliments on your blog. To get it more widely noticed, grab your
free copy of
Links Explode

Be nice to Olaf, he's been thinking about all this for a couple of weeks now and has it all figured out.

He's not sure of much but he knows no matter what Harper's right.

Dave : Yeah, I know. And not that it was very clear, but Damnation is the xian nation.

Olaf : "What does it matter?"
All the Lib candidates, and probably most of Canada, recognize that Quebeckers are a nation within a nation to whatever degree.
Iggy unnecessarily kicked it up a notch by pledging to create a task force to consider how to formalize it. The separatists will now use this appalling lapse of judgement on Iggy's part to rile up their base on the grounds this is just more empty rhetoric. Which it is.
What gains do you see in this for anyone?
Jan is right - point to Harper here.

Oops. I just checked it - Iggy's word was actually "officialize".

He's not sure of much but he knows no matter what Harper's right.

Seriously, do you ever get sick of talking out of your ass? I've written about 20 posts in my relatively short stint criticizing Harper.

I would argue that the government didn't recognize Quebec as a nation, but the sociological Quebecois, which are different entities.


What gains do you see in this for anyone?


No gains, it's definitely not an appealing situation. But I don't really see any losses either. And I'd rather Harper recognize the sociological Quebecois, than allow Iggy into office and recognize "Quebec" as a nation, which would be far more damaging in my opinion.

alison, that's the perfect connection, Harper and Ignatieff once again shaking hands across the floor of the Commons.

For our sakes, and for the only time in my life, I hope that means that Harper still got the better of Ignatieff, which would require that the Liberal convention now get the better of Harper (and thus Iggy) by considering the issue over and done with.

quebec can call themselves anything they want....fact is there are sovereign nations within canada and those are THE FIRST NATIONS. odd how canada refuses to reocognize the royal proclamation (still standing) that honours this.

quebec may be a unique culture but the seperatists have never drawn out a plan that is inclusive of the inherent rights of natives. but then ipperwash was a pretty ugly reminder of the intolerances displayed by a province whos government asks for tolerance and recognition for itself.

does zionist israel ring a bell?

at least all of this will probably kick the igster out of the leadership race (one hopes).