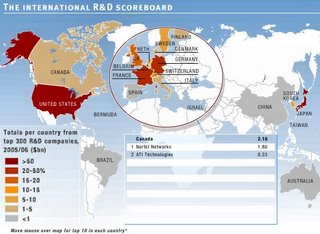 This map tells you everything you need to know about why Harper is having the word "innovation" expunged from Industry Canada.
Click here for an enlarged interactive version of it.
Of the top 300 Research and Development companies in the world, Canada shows two for a total of $2.18bn last year. And the second one, ATI, was just sold off to a foreign investor so now we're down to one at $1.86bn.
Instead of investing in innovation, we're having a yard sale.

From The Star :
"In the past two years, more than a dozen of Canada's largest corporations, with total assets of more than $57 billion, have been swallowed by foreign predators. And the response has been ... well, there really hasn't been a response."

In the 70's, Trudeau responded to public outrage over the selling off of Canadian companies by creating the Foreign Investment Review Board (FIRA) and two Crown corporations — Petro-Canada and the Canada Development Corp. — to repatriate foreign-owned industry.

Today we have NAFTA, and the ubiquitous Wendy Dobson, former CEO of C.D.Howe, one of the authors of the original deep integration Task Force on the Future of North America and an attendee at the recent secret Banff conference, saying :

"We shouldn't be concerned about who owns the corporations."

Evidently it is of no concern to her that last year Hudson's Bay Co., Falconbridge, Molson's, Fairmont Hotels, and Sleeman Breweries all became branch plants of absentee landlords.

Yard sale.
Investment Canada, the successor to Trudeau's FIFA, has a mandate to ensure that these deals have a "net benefit to Canada". Time for them to get out there on the lawn and start hauling our stuff back inside.

UPDATE : Great piece from Galloping Dave on how Harper is banning words like innovation to reframe the message.
Broken link to The Star fixed.
Posted by Alison at 11:32 pm
Email ThisBlogThis!Share to TwitterShare to FacebookShare to Pinterest
Labels: Economy

Of the top 300 Research and Development companies in the world, Canada shows two for a total of $2.18bn last year. And the second one, ATI, was just sold off to a foreign investor so now we're down to one at $1.86bn.

How exactly is this Harpers fault again? Would Canada be leading in R&D if Harper would just use the term "innovation" more?

Maybe they'll come up with a plan to encourage businesses that invest in innovation by the year 2050?

Harper's thrifty. He wants to avoid wasting any of our money before the rapture.

Creeping about in the gutters again I see Olaf.

I thought your seminar leader had warned you off that.

You really ought to take that reading comprehension class you crapped out on last year.

when fira went i was very disheartened...it's been one move after anohter to control our resources, and with harper acting like a used salesman at the g8 scumpit 'canada is an exporter of energy and resources' , the land went 'ouch' to more rape.

'innovative' obviously implies brains to harper...dismantling academics is always top on the list for dictatorships. the provinces have played in nicely to the game, ensuring canadian elite kids and foreign students who will pay tons then go back home are numero uno for education. now this.

From the silver lining point of view, maybe BM the Younger could do the same thing with stupid gonged-out reality shows?