You missed your court date?

And you'd like a three month extension to find those missing detainees and your case?

"After missing a court deadline, Canada's Department of National Defence has decided it now wants to defend itself against accusations that its Afghan detainee policy violates international law and the Charter of Rights and Freedoms.

Under a controversial policy, Canada hands battlefield detainees to Afghan police and army forces without any follow-up.
"Retrieving and reviewing all relevant documents, including those generated in Afghanistan, is an enormous task,” the letter says."

Yeah, about "retrieving" those "relevant documents" :

"Two assistant deputy ministers told MPs in December that Canada had been notifying the Afghan International Human Rights Commission of the names of transferred detainees for months. But in a March 15 letter revising their statement, they wrote that Canadian Forces didn't pass along any of the names of transferred detainees.
"No notifications, in fact, took place," until last month, the two assistant deputy ministers wrote."

That'd be our old friend Vincent Rigby, dropping O'Connor in it again.

So does anyone have any kind of list?
After all the AIHRC has only eight guys monitoring the whole of southern Afghanistan. And they're doing it without any help from us :

"Mr. O'Connor said last week that the Defence Department would not provide any
money to AIHRC.
"I think it would be improper to give them any money because it would appear that this is not an unbiased organization." 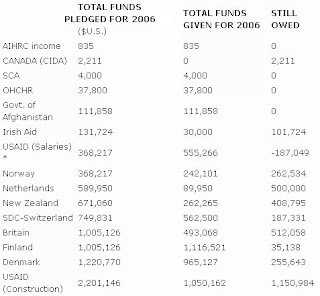 So we're the only country not providing any lists of detainees nor any funding to keep track of them.

"However Gen. Hillier has insisted that the highest priority is placed on safeguarding captives."

Be glad for this, Alison.
The way this guy is going, support for getting us out of Afghanistan will skyrocket.

Did you see Walkom yesterday?