"What on Earth!" Are We Thinking? 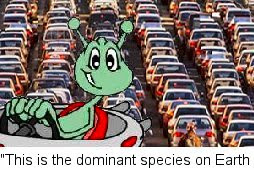 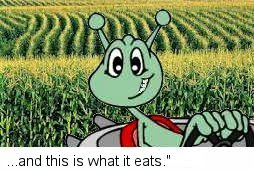 There's something quite obscene about feeding corn to cars, isn't there?
Ditto wheat, barley, sugar cane or palm trees.
Forty years ago the NFB aired a little cartoon "What on Earth!" in which Martians come to Earth and determine that cars are running the whole show.
Things have got much cornier since.
Today we have agri-biz enthusiastically promoting ethanol and biofuels though the Canadian Renewable Fuels Association, with their oddly familiar-sounding slogan : "A Climate Change Solution Made In Canada".
CRFA head Kory Teneycke is a former Reform activist and was a Con strategist during the last election.
Ken Boessenkool, one of Harper's closest advisers, is registered to lobby for them. (Thank you, Holly Stick)
Unsurprisingly, last week's budget from the Cons contained $2 billion in incentives for ethanol.
CRFA members include Agricore, Archer Daniels Midland, BASF, Cargill, General Motors, Monsanto, Pioneer Dupont, Suncor Energy Products, Shell Canada, and Sylvite (fertilizer).
Well, you say, what could possibly go wrong?
Just this - Ethanol is a product of food and fossil fuels.
Despite arguably burning 12% cleaner, it consumes more energy in its production than it contains, making it a negative energy source.
George Monbiot : “It used to be a matter of good intentions gone awry. Now it is plain fraud. The governments using biofuel to tackle global warming know that it causes more harm than good. But they plough on regardless.”
Celsias : "Big industry, desperate to retain consumer dollars, is influencing government - who are in turn pandering to very destructive whims."
Celsias , a great source of resource material on biofuels, has a shocking video of horizon-to-horizon forest clearing in Sumatra to grow bio-fuels.
Link to Celsius found at DeSmogBlog, following an article on how running out of oil could worsen climate change.
I know this all sounds terribly depressing. The good news is how much more we know about how all this works now, compared to the people who first watched "What on Earth!" forty years ago.
UPDATE : Front page of YahooNews : Scientists weigh downside of palm oil.
Draining swamps and burning forests in Malaysia and Indonesia to plant palm oil crops now accounts for 8% of the world's fossil fuel emissions.
Posted by Alison at 1:14 am
Email ThisBlogThis!Share to TwitterShare to FacebookShare to Pinterest
Labels: Biofuels, CRFA, Environment

Brazil has a much more efficient way of extracting ethanol from cane, and I believe they blend as much as 85% ethanol with their gasoline. It's success comes with a price, however, since cane production is encroaching on the rain forest.
I am working on a project looking into ethanol extraction from wood (waste) pulp, and would appreciate any information your readers might have on this topic. I can be reached at arnet@saltspring.com
Thanks!

Re : Brazil. If cars burning the higher ethanol mix won't start on cold mornings in Brazil....

Doesn't it make sense to continue researching ethanol/biofuel production in effort to develop a way to produce these products more effeciently?

I don't think Alison is calling for a moratorium on research, Anon, but for research not to get hijacked by agribiz to cause even worse destruction. At this point, biofuels are just being used as yet another greedy scam and I agree with her that it is obscene to feed corn to cars while people go hungry.

Thanks for the Celsias link, Alison. Very informative site.

The thing I don't get is how the annoying (at least to me) CRFA ads with the geek running around 'interviewing' people and showing them Harper's 5percent biofuels promise a/contains stupid information like "Can you make it out of fish? ..uh yeah, sure..." (doesn't this sound like someone promising the moon is cheese just to get people to agree biofuels are a good thing and Harper is great?)

and b/ the CRFA spots have started showing crawl text along the bottom of the propaganda ads stating "thank you mister harper etc" That wasn't there when the ads started.

Isn't this third party advertising for the Conservative party? I thought that was illegal?

I dearly wish someone would do a U-tube rebuttal ad of the damn things.